French writer-director Luc Besson returns to wild sci-fi territory with hot mess Valerian and the City of a Thousand Planets.

Valerian, the titular character of writer-director Luc Besson’s latest sci-fi venture, sits on a chair in a futuristic burlesque club. A camp cowboy pimp called Jolly, played by Ethan Hawke, is tinkling away on a piano while a blue jellyfish-type humanoid has shape-shifted into pop superstar Rihanna. She’s doing an extended sexy dance routine in which she, through the aid of state-of-the-art digital effects, is changing outfits and occasionally spinning on the stage’s lone pole.

Valerian’s decision to watch Rihanna gyrate for an extended period is completely understandable. Few could fault our hero’s keenness to see the performance through to its climax. But, despite Rihanna’s genetic make-up, his attentiveness is a little odd when you consider that in this moment Major Valerian (Dane DeHaan) is on a seemingly urgent secondary mission to rescue his partner Sergeant Laureline (Cara Delevingne) from a hulking tribe of aliens that intend to eat her, as well as a primary mission to defeat an unknown alien presence that may be threatening to destroy “The City of a Thousand Planets”, a mammoth spaceship that is key to alien relations throughout the known universe.

Oddball moments like this – the most extreme suspensions of disbelief – are just some of the reasons why critics have been divided in their assessments of Besson’s sweeping, wildly indulgent and visually spectacular new movie Valerian and the City of a Thousand Planets.

The opening montage of Valerian, imbued with nostalgia by David Bowie’s ‘Space Oddity’, depicts the evolution of the International Space Station into Alpha, a complex gargantuan spaceship that opens its doors to new races of aliens and soon expands to a stupendous size. The co-operation between intelligent species means Alpha is a key exchange of knowledge and ideas, and the myriad races live together in relative harmony.

Then we find ourselves on an idyllic beach planet. We’re introduced to a majestic and toned humanoid race of low-tech natives, strangely reminiscent of the Na’vi in Avatar, just as debris from a space battle tears through their atmosphere and destroys their pristine locale. Their fiery fate appears to Major Valerian in a vision, but he has little time to investigate because he and partner Laureline are urgently called upon by their commander Arün Filitt (Clive Owen) to solve a mystery unfolding in the heart of Alpha. Something growing in the spaceship’s core is threatening to destroy the intergalactic hub. Romance also has to take a backseat, as horn-dog Valerian intends to convince Laureline that he’s not the fuck boy she thinks he is and that they should be together.

The beloved French graphic novel series Valérian and Laureline, written by Pierre Christin and illustrated by Jean-Claude Mézières, debuted in 1967 and has had something of an unsung influence on modern science fiction. The design of the series, centred around the working and romantic relationship of its two title characters, has been credited with influencing everything from Star Wars to Independence Day and Conan The Barbarian.

Besson has been a fan of the Valerian graphic novels since he was a child. His connection to them grew when Mézières contributed to the design of Besson’s American breakthrough movie The Fifth Element, which was the highest grossing French production at the foreign box office until 2011 schmaltz fest The Intouchables bumped it from the mantle.

Valerian won’t quite follow in The Fifth Element‘s footsteps at the box office, though both films demonstrate Besson’s creative genetic make-up – ingredients that as a viewer you either love or hate; cheesy humour and dialogue, inventive set pieces and whimsical central ideas. Both are pieces of escapist cinema that Besson clearly hopes will find an audience in all age groups. Since his 1994 masterpiece Léon (known in Oz as The Professional), Besson as a screenwriter and director has been more interested in creating a heightened cinematic reality on screen, penning numerous action movies, than immersing the viewer in gritty humanist drama. The exception is 2011’s The Lady, a biopic about the rise of current Myanmarese State Councillor Aung San Suu Ky, but that well-received film is wedged amongst his writing for the Taken and Transporter action franchises.

Valerian is a return to the immersive science fiction of The Fifth Element (which recently celebrated its 20th anniversary) and demonstrates what Besson can achieve on screen with the advanced technology invented by James Cameron to make his Avatar films. The special effects here are truly incredible. And buried amongst the sensory overload is an interesting central narrative, a morality tale worth of dissection. But a series of key ingredients do Besson’s vision a great disservice.

“In a fairer world it would be her name in the film’s title and not that of Valerian, whose charisma is tantamount to being slapped in the face with a moist leaf of bok choy.”

Major Valerian proves the major issue – the casting of DeHaan as the super-confident Lothario and gifted special agent is a misstep. The ethereal actor doesn’t convince in regards to both charm and physicality. Besson might have been looking for a less typical action hero to cast as his central character, but DeHaan is a dour performer more suited to the likes of Gore Verbinski’s A Cure For Wellness, in which his sullen features made him perfectly suited to that gothic thriller. DeHaan’s chemistry with colleague Laureline is central to the film’s overall success and it’s simply lacking. With every frame imbued with life and vivid imagination, it’s a shame that the title character proves so draining on the film’s energy.

In extreme contrast, Delevingne is a revelation. The actress is a strong, radiant presence and there’s a take-no-bullshit comic subtlety to her performance that elevates Laureline’s otherwise one-dimensional characterisation. In a fairer world it would be her name in the film’s title and not that of Valerian, whose charisma is tantamount to being slapped in the face with a moist leaf of bok choy. 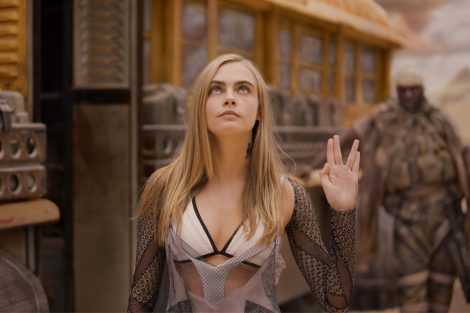 The feeling one takes away from Valerian is that it’s another grandiose missed opportunity for major science fiction to appear on screen outside of the Marvel or DC universes, a realisation familiar to those that saw The Wachowskis’ ambitious but ultimately forgettable space opera Jupiter Ascending. Valerian is superior to that movie – perhaps better compared to Disney’s 2012 flop John Carter which was hugely enjoyable in spite of its cheesiness. There are kitsch laughs to be gleaned from the fast-paced adventure of Valerian, but for every great moment are two more pieces of clunky dialogue or inexplicable digression (like the aforementioned Rihanna sequence). Besson’s quirks are silly and fun – in and of themselves very un-American and endearing – but the glaring flaws of Valerian are hard to look past.

It’s easy to forget that on paper The Fifth Element was built on a fairly cheesy and very simple premise, but a well chosen cast propelled it into “classic” territory. Valerian would be a very different movie with that film’s central actors, Bruce Willis and Milla Jovovich, leading the action – and vice versa. Willis was a bona fide movie star and Jovovich was mesmerising as the film’s title character. We need their star power in Valerian. With over $200m worth of world-building lighting up the screen, it’s a shame that Besson’s sci-fi return is ultimately let down by the element that costs the least to create – the screenplay.