AN ANCIENT EGYPTIAN GODDESS HAS HER HEART SET ON BEING WITH TOM CRUISE IN THE TEDIOUS FIRST INSTALMENT OF THE “DARK UNIVERSE” FRANCHISE.

In a refreshing change from the status quo, Universal has decided to dust off their classic monsters intellectual properties and create what’s known as a “franchise”; this is a series of interconnected movies with outrageous budgets, big-name bankable stars and state-of-the-art special effects.

Amongst these IPs are Frankenstein, Bride of Frankenstein, Creature from the Black Lagoon, Van Helsing, Wolf Man, Dracula, Phantom of the Opera, Hunchback of Notre-Dame and the Invisible Man.

The first film to roll off the so-called “Dark Universe” conveyor belt, a long-term project headed by seasoned blockbuster screenwriter Alex Kurtzman, is The Mummy. It’s not connected (save for one small Easter Egg) to the wildly enjoyable Mummy series created by director Stephen Sommers in 1999, which starred Brendan Fraser and Rachel Weisz, but rather a present-day reimagining of the Mummy mythology and a peek into the shared universe to come. Both 2017 and 1999’s Mummy movies are technically remakes of Universal’s 1932 film of the same name, which starred Boris Karloff as the titular mummified antagonist.

In this new update, Tom Cruise plays himself, who is in turn pretending to be American soldier and ancient artefact thief Nick Morton who, along with partner in crime Chris Vail (Jake Johnson), visits abandoned Iraqi towns and raids their priceless possessions before terrorist groups arrive to wreak havoc and unknowingly cover the pair’s tracks. They’re following a map that Tom Cruise has stolen from archaeologist Jenny Halsey (Annabelle Wallis), which he snatched during a one-night stand. After coming under heavy fire, Tom Cruise and Vail accidentally uncover a hidden tomb of Egyptian origin.

We’ve learned from the film’s opening monologue and flashback montage that this is not so much a tomb, but a prison designed to detain the evil goddess Princess Ahmanet (Sofia Boutella). When her father’s new born son takes her place as heir to the throne, Ahmanet cracks the shits and sells her soul to the God of Death, Set. She makes a deal that once she has killed her baby brother and father, she will ritualistically kill a chosen lover with a special dagger and Set will enter the lover’s corporeal form. They’ll rule together. But before she can enact this final part of the plan, her father’s priests ensnare her and mummify her alive.

Needless to say, when Tom Cruise foolishly cracks open her sarcophagus thousands of years later, Ahmanet’s keen to do more than just stretch her legs and get the latest iPhone. The sexy-despite-being-a-zombie Princess wants to rule the world and finish the last part of her deal with Set. She chooses the first decent-looking piece of man-meat that she lays eyes on, which happens to be famous movie star Tom Cruise. Now Cruise’s cursed, and Ahmanet won’t stop until she’s turned him into her Set beau. You might say she’s… got her heart Set on it? Nice.

Tom Cruise is tracked down by Dr. Henry Jekyll (Russell Crowe), who has a particular interest in the science of ancient evil and intends to help Tom Cruise with his little curse problem, whether he likes it or not.

When we meet him,Tom-Cruise-under-a-different-name is the lowest of all thieves and is completely without honour. The moment in which he releases Ahmanet is an act of incomprehensible douche-baggery.

If anyone is capable of elevating hackneyed material and a by-the-numbers vehicle with pure unadulterated leading-man charisma, it’s Tom Cruise. At age 54, he seems most comfortable as the action hero, scrambling from one state-of-the-art set piece to another. There’s not a world of difference between the smug confidence and detached charm of Ethan Hunt, Jack Reacher and The Mummy’s Nick Morton aka Tom Cruise. Each is resourceful and physically capable and Cruise seems abundantly aware that his star power is worth the price of admission.

And yet, in The Mummy, he has never been so boring or unlikable. When we meet him, Tom-Cruise-under-a-different-name is the lowest of all thieves and is completely without honour. The moment in which he releases Ahmanet is an act of incomprehensible douche-baggery. The Halsey character picks our hero as a dickhead early on and then, in dutiful female lead fashion, seems intent on trying to fall in love with Tom Cruise, asserting that deep down there’s a nice guy inside him just waiting to get out. But is there? And Cruise as Morton is no likeable anti-hero, he’s just a shit bloke that got himself into a situation he’d rather not be in. 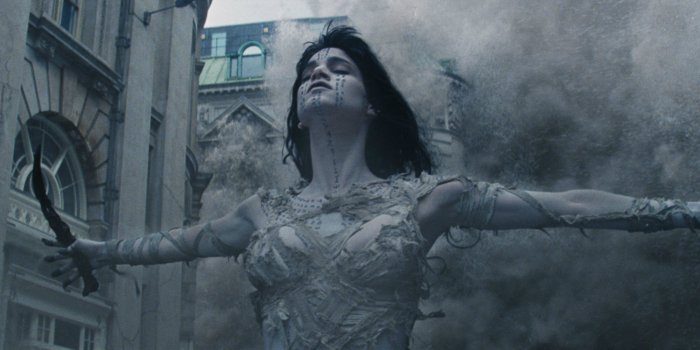 The Mummy falls flat in every aspect. This is slightly unexpected, as Cruise is normally a better judge. His recent forays into fantasy and science fiction, Oblivion and Edge of Tomorrow, two films in which he also plays Tom Cruise, stole ideas in the same way Morton steals artefacts. Those two films were by no means classics but at least they were enjoyable popcorn spectacles with scintillating set pieces. They kept your attention.

Cruise has also been very careful to up the ante with his Mission Impossiblestunts and sequences. You can sense his desire to be inventive, either through narcissistic self-indulgence or a genuine desire to impress his fans. The Mummy‘s anti-gravity plane crash (which Cruise had supposedly been keeping in his back pocket for a Mission Impossible flick), is a stand-out, but not as jaw-dropping as it might have been.

One of the big moments in Kurtzman’s film, a conjured sandstorm sequence where Ahmanet’s face looms in the cloud as it rolls down a city street, is stolen from Stephen Sommers’ 1999 version. Imhotep will be pissed.

So what happened with The Mummy? What director Kurtzman has delivered is a joyless, uneven exercise that never reaches any great height. We’ve just seen this all before. Cruise phones in his most beige performance, tied to a series of strange, confused expressions in which he tries to understand visions that Ahmanet has planted in his mind. Compare this Morton alias to Brendan Fraser’s Rick O’Connell in the previous Mummy and the latter looks like Laurence Olivier. While Fraser’s moment as a bankable action hero seems to have come and gone, his metamorphosis from Encino Man funny guy into rugged, buff adventurer meant he had a keen sense of comic timing and he delivered his one-liners with aplomb.

Jake Johnson, of New Girl, Jurassic World and a host of great indie flicks fame, has been shoehorned into the script, seemingly to bring some of the schlocky quirks that many of the original Universal monster movies had in spades. But he just doesn’t fit in, instead relegated to a comic device that’s been blatantly stolen from An American Werewolf in London. Every time he yells “Nick!” at Cruise’s character, he may as well be looking in a mirror talking to his New Girl character of the same name. Johnson struggles in a movie that takes itself way too seriously.

Russell Crowe, whom Australia went to some effort to steal from New Zealand, is one of our finest actors. Yet here, as far as ham acting goes, he serves up a suckling pig. His Dr Jekyll/Mr Hyde schtick is but a cartoon character. We know, both on screen and off, our Rusty can be a very intimidating bloke, but there’s not much to be excited or scared about when Mr Hyde appears. Crowe’s immense talents have been wasted.

Like so many other movies with designs on being overblown special-effects extravaganzas, The Mummy falls down in its characterization. Some writers can economically shape a character in our heads with limited screen time, through clever, intelligent dialogue and relatable motivations, and still provide mesmerising action. In this, Christopher Nolan’s Batman trilogy was a masterclass. The Dark Knight had nuance beyond the spectacle and, in a very meta way, explored the idea of what it was to be a comic book hero. But The Mummy has no such aspirations. The screenplay by heavyweights David Koepp, Christopher McQuarrie and Dylan Kussman, banks on the fact that we already know this Cruise character, that we’ll transplant Ethan Hunt and Jack Reacher into this film; that knowing Cruise himself is simply enough to go along for the ride. It’s not.

Cruise reportedly had major input into every facet of The Mummy and it’s a curious insight into the actor. If you believe reports of Cruise’s role within the Church of Scientology, theorised in Alex Gibney’s compelling doco Going Clear, the actor’s God complex is fuelled by the reverence he is shown within the cult. He’s treated and worshipped as a deity. Those scenes in Gibney’s film echo in the back of your mind as the all-powerful Ahmanet chooses to lust after Cruise, no matter the cost, with the narrative building to a predictable finale that seems designed to prop up the idea of Cruise as super-human.

The Mummy is a big, faltering step for Universal and its grand designs for this new franchise. Next in the queue is Bride of Frankenstein, slated for release in February 2019 with the very sturdy Bill Condon (2017’s Beauty and the Beast) at the helm, and one can only hope that Universal finds a way to recapture the gothic fun and pure cinematic escapism of the franchise that its chosen to dig from its grave and reanimate.