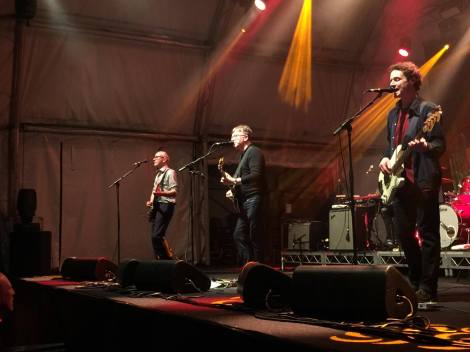 “This one’s for the elephants,” says Norman Blake in his soft Scottish brogue.

The Teenage Fanclub co-frontman is referring to the Asian elephants that reside in a nearby enclosure. The big endangered animals have arguably the best seats for this Twilight at Taronga concert series of any of the other exotic creatures in Sydney’s iconic zoo.

The elephants raise their trunks in appreciation of the shout out. They’re visibly enjoying the stunning three-part harmonies of Teenage Fanclub, nodding along to each of the legendary power pop band’s gorgeous, dreamy and achingly melodic choices. Between songs, the majestic animals snort bags of peanuts, bemoan the existence of mice and reflect on events from the distant past with crystal clear accuracy.

One of the Asian elephants is heard to remark, “they’re alright, but I’d rather be at Adele.” The eager, outspoken bull is swiftly ousted from the herd, humiliated and left to cower in the shadows of the sprawling enclosure.

There are two Teenage Fanclub fans standing just in front of me, seemingly oblivious to the elephants’ interactions, both a reflection of the general demographic of the audience: greying hair, glasses, a doughy centre and impeccable taste in music. One of them, who I suspect is an accountant who also writes album reviews for the local streetpress, turns to his amigo and asks, “What’s the difference between an African and Asian elephant?” It’s not the start of a joke, he’s generally interested in the distinction. The amigo replies, “From what I understand, Asian elephants eat takoyaki.” It’s one of those Surry Hills quips that tickles my fancy. I’m already smiling as a result of the music, so my amusement at the response is not apparent to those around me.

Fanclub opened the show with a deep cut, namely ‘Start Again’, the first song from their 1997 record Songs From Northern Britain. It’s one of the few classics that we’ve been treated to so far, with the live five-piece clearly intent on showcasing their latest work, the album Here.

Bassist Gerard Love might be the most subdued performer in the world, but he still sings and plays the guitar like someone guilty of a Faustian pact.

The record is, as one would expect, painfully catchy, but it’s also an album that unfolds with repeated listens. It doesn’t have the brazen immediacy of Grand Prix or Bandwagonesque, and meets at the crossroads between their radiant power pop and Byrds-y methodologies. Subsequently, the show has a soft, dreamy, introverted atmosphere. The wall of guitar that fans love from the band’s early work has taken a back seat. A brief exception is the especially “classic” sounding ‘Thin Air’.

Teenage Fanclub may never have been great projectors – their stage presence is understated, to stay the least. You’re required to concentrate and tune in. The pay-off justifies the investment.

Guitarist and co-vocalist Raymond McGinley has parted ways with his long hair, and now has a touch of the Mark Knopflers about him. His feel for the axe is second to none. Bassist Gerard Love might be the most subdued performer in the world, but he still sings and plays the guitar like someone guilty of a Faustian pact. Behind it all, Francis Macdonald is in the engine room, keeping time with powerful finesse.

Although the 90-miunte set has been heavy on new material, some classics emerge in the final stages. We’re treated to ‘Star Sign’ and ‘The Concept’ from Bandwagonesque, and Love bestows his tune ‘Sparky’s Dream’ upon us. A welcome inclusion is ‘It’s All in My Mind’ from their gorgeous Man-Made record, and a nod to the Aussies – a cover of Grant McLennan’s ‘Easy Come Easy Go’.

The night ends with a trip through time, right back to Fanclub’s 1990 debut A Catholic Education and the song ‘Everything Flows’.

As the Scotsman depart, smiles flow out the gates. The elephants make their way to the merch stand, quietly hoping there’s a 9XL.