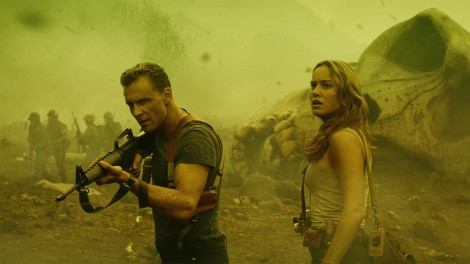 When Tom Hiddleston’s charming cardboard hero predicts the ways in which the members of a planned expedition to an unchartered island will die – “rain, heat, disease-carrying flies” – he redefines the concept of an understatement.

That’s because said destination, Skull Island, is full of nasties. Big ones. Snappy ones. Flying ones. Spidery ones. At the top of the food chain on this stunning South Pacific locale is King Kong, a big ape with a big heart. Cinema-going audiences will be familiar with this iconic creature, having first appeared as the titular stop-motion character in the 1933 classic by Merian C. Cooper and Ernest B. Schoedsack, and later returning for the 1976 Dino De Laurentiis production (where he evolved into a bloke in an ape suit) and the Peter Jackson epic in 2005 (special effects galore). I’ll mercifully omit Mighty Joe Young.

In Kong: Skull Island the chunky monkey returns, resurrected with the full gamut of modern CGI trickery, for the second instalment in Legendary’s burgeoning MonsterVerse (following Gareth Edwards’ 2014 Godzilla). With spectacular set pieces and a strangely uneven tone, young director Jordan Vogt-Roberts (taking a giant leap in budget after his acclaimed 2013 indie The Kings of Summer) borrows heartily from both the 1933 and 1976 versions. The result is both an enjoyable popcorn spectacle and an aimless rumble in the jungle.

Dropping a shit-tonne of explosives is, disappointingly, the only attempt that Kong: Skull Island makes to break new ground.

Skull Island, like the 1976 film that starred Jeff Bridges and Jennifer Lange in her big screen debut, is set in the ’70s. America has just pulled the pin on Vietnam, leaving military personnel relieved, frustrated and bitter. We quickly meet Bill Randa (John Goodman) and geologist Houston Brooks (Corey Hawkins – Dr. Dre from Straight Outta Compton), who work for a government organisation called Monarch. They convince a senator to fund a reconnaissance mission to an unchartered island. They recruit former British SAS captain and expert tracker James Conrad (Tom Hiddleston) and a helicopter squadron known as the Sky Devils. Led by Preston Packard (Samuel L. Jackson), an intense single-minded United States Army Lieutenant Colonel, the rag tag Sky Devils are assigned one last mission – to escort the group of scientists to Skull Island. This wouldn’t be a King Kong flick without a blonde beauty and in this instance it’s photojournalist and peace activist Mason Weaver, played with measured tenderness and tenacity by Academy Award-winner Brie Larson.

In the film’s most spectacular passage of play, the helicopter squadron must carry the crew through a dense and angry storm that perpetually encircles Skull Island (thus, in an idea borrowed from the 1976 film, explaining why its never been explored). On the other side of the storm the scientists quickly go about their work – bombing the surface of the island to create the vibrations necessary to map its surface. In a well-staged sequence that nods heavily to Apocalypse Now – and makes effective use of Black Sabbath’s ‘Paranoid’ – the choppers started destroying the country side. It’s like a bucks weekend in Bali. King Kong doesn’t like bombs dropped in his backyard and quickly demonstrates his less than diplomatic approach to tourist relations.

Dropping a shit-tonne of explosives is, disappointingly, the only attempt that Kong: Skull Island makes to break new ground. Its cast of archetypes are thinly drawn, largely indispensable and there’s just too many of them. It’s a character cluster-fuck. We don’t know these people before they arrive on the island. And we sure as hell don’t know them before the local fauna starts going the proverbial chew. Hiddleston, Larson, Goodman – they’re each given a one-sentence character. Their skills in front of the camera carry them through, but they’re not served by the screenplay. Kong is by far the most compelling character, and he never utters a word.

Of all the human cast, Jackson gets something to sink his teeth into and he proves the film’s saving grace. After watching Kong tear through his squadron, he forms a Captain Ahab-like obsession with the Great Ape, setting him on a thrilling collision course with the giant animal. Jackson’s at his best when he’s angry, and he don’t like this motherfuckin’ monkey.

John C. Reilly appears as Hank Marlow, a World War I pilot and token comic relief that crashes on Skull Island and lives out 28 years with the local Kong-worshipping tribe. Though he’s an inherently funny man, here Reilly has been thrown a hospital pass. His jokes fall faster than Kong downs choppers, and the pitch of his comedy is completely at odds with the rest of the film.

The Marlow character exemplifies the film’s major flaw. There’s confusion here as to the tone – which is disappointing, as Edwards’s Godzilla movie was so effective – and ambitious – in taking the sensational material seriously, believing in the characters and the drama of the narrative. Skull Island has no interest in being adult, building tension, emotion, or even terrifying its audience. It’s shiny, soulless spectacle – and not funny enough to be a lively pseudo comedy. It’s in a strange, barren wilderness of tone, perhaps attributable to the fact it had three screenwriters. The horse turned into a camel? Our cast wander, wide-eyed, from one monstrous encounter to the next, each new creature ultimately diminishing the impact of what’s to come. Vogt-Roberts might have been served by watching less Apocalypse Now and more Jurassic Park.

Critics were quick to lampoon Peter Jackson’s indulgent 2005 tribute to the 1933 original, but the Kiwi’s effort is far more consistent than what’s on offer here. Jackson’s reverence for the material was writ large in every frame, melding his love of classic Hollywood romanticism and his penchant for occasional horror. The staging of the Empire State Building finale was thrilling and consequential, as was the faithful recreation of the “spider pit scene”, a sequence famously cut from the 1933 original for being too violent.

As a pre-mediated reboot, Skull Island was an opportunity to breathe life into the concept and reinvigorate the monster genre – but the film gleefully thumbs its nose at this notion. Like most exercises in style over substance, its enjoyable on the big screen and, in its own heavy handed way, an effective piece of escapism. The dazzling complexity of the special effects engender amazement. The deaths are almost exciting. But just like the “Hollow Earth” theory that pervades this new franchise, there’s some cavernous holes beneath the surface.

Let’s see if Godzilla: King of the Monsters can bring some bite when it roars into 2019.