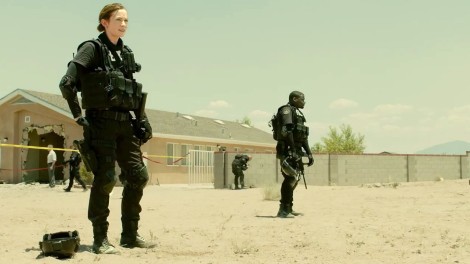 “This is a land of wolves now… and you’re not a wolf,” warns Benicio del Toro’s menacing anti-hero to Emily Blunt’s heroine. He’s not joking. There are wolves aplenty in the morally murky and violent world of French-Canadian director Denis Villeneuve’s Mexican drug cartel thriller Sicario.

Kate Mercer (Blunt) is a talented FBI Special Weapons and Tactics Team agent who leads a raid on an Arizona residential property owned by a Mexican drug cartel. Looking for hostages, the team instead finds walls lined with corpses. Mercer is then approached by shifty government agent Matt Graver (Josh Brolin), who promises that if she volunteers to join his motley crew she will have the opportunity to take down the head of one of the major cartels. On Graver’s team is Alejandro Gillick (Del Toro) an intense man of few words who has motivations of his own. The idealistic Mercer joins them in the hope of making headway in the war on drugs, rather than simply “cleaning up the mess” left by cartels on American soil.

Over the next three days Mercer is drawn into a world in which the line of morality is difficult to find – a line that metaphorically and geographically straddles the US-Mexican border. On day one the curtain is drawn back for Mercer as she joins a police escort through the mean streets of Juárez, Mexico.

As Graver’s team accelerate their morally questionable efforts to find their kingpin target, Mercer must hurriedly decide which side of the “does the end justify the means?” question she stands on.

That delicious question was also at the heart of Villeneuve’s superb 2013 thriller, Prisoners, his first English-language movie. He makes no attempt to provide answers in Sicario but does demonstrate obvious sensitivity to the uncountable victims of the endless war between Mexican drug cartels and the Mexican and American governments. In a less-than-subtle side plot, we are taken into the mundane home life of Silvio, a family man caught up in his volatile environment. Silvio provides screenwriter Taylor Sheridan a face for the average person affected by the civil war in Mexico.

But you can forgive the obviousness of Silvio’s inclusion in the face of the film’s subtleties. Villeneuve, as was further demonstrated by his wonderfully abstract 2013 film Enemy, has a literary sensibility. While deft at action set pieces he is also concerned with finding layers of subtext.

And Sicario finds moments of apocalyptic beauty, including one striking shot in which the sunset shadows of soldiers slowly descend into the black desert’s horizon. Villeneuve is rejoined by Prisoners cinematographer and Hollywood legend Roger Deakins, who provides long, stunning helicopter shots of the arid desert that flanks the US-Mexican border. The otherworldly location, when married with the sustained, discordant notes of Jóhann Jóhannsson, who also wrote the music for Prisoners, is a stark and immediate reminder that you are being taken to a frontier of human existence.

Sicario, a word that in Mexico means “hitman”, is serviced by three supreme lead performances. Del Toro, much like the film’s overarching morality, blurs the good guy/bad guy line within Gillick. In the hands of another actor and director he may have been nothing more than a monster. Brolin’s Graver is assured and smug, unwavering and strangely charismatic. And Blunt, the innocent through which the film is filtered, centres the movie, making Mercer both astounding brave and emotionally vulnerable. Blunt’s balanced performance echoes of Jodie Foster’s Clarice Starling, as her character navigates a bleak, brutal and masculine microcosm. Mercer might not be a wolf, but she’s no lamb to the slaughter.