AMERICAN DREAM: Leonardo DiCaprio in The Wolf of Wall Street.

THE WOLF OF WALL STREET

It is ironic that director Martin Scorsese’s epic three-hour hedonistic hurricane, The Wolf of Wall Street, is summarised perfectly in its final three seconds. But it’s also supremely poetic. The camera pans up to a sea of wide-eyed faces gazing at “The Wolf” himself, Jordan Belfort, as he launches into a motivational lecture. In this final moment Scorsese is holding up a mirror to us – the viewing audience. We are agape and marvelling at this dynamic individual.

And this is not a spoiler, because we know how this story ends.

In real life Belfort now makes significant money as a motivational speaker and from sales of his two memoirs – one of which is The Wolf of Wall Street.

But the 22-year-old, New York-native that we meet in this fifth collaboration between Scorsese and actor Leonardo DiCaprio has aspirations of being a stockbroker. His first day on the job in Wall Street, in 1987, is referred to as “Black Monday” – a stock market crash that sees him immediately out of work.

This bad luck does not hinder Belfort. He applies for a job at an Investor Center – known in the business as a “boiler room” – that trades in penny stocks, a form of stock that are cheap and semi-illegal. With his aggressive sales techniques and the 50 per cent commission he makes from penny stocks sales, Belfort is soon independently wealthy.

He is approached by a furniture salesman who lives in his building, Donnie Azoff (Jonah Hill), and the two soon start a business together called Stratton Oakmont (Hill’s character is based on Stratton Oakmont ex-president Danny Porush). Through rampant stock manipulation and numerous shady practices, the company grows exponentially – and around Belfort blooms cult-like worship.

As Belfort’s life grows into a roller coaster of extreme excess and shifts further and further from reality, the FBI – led by agent Patrick Denham (Kyle Chandler) – soon starts to circle.

SEX AND MONEY: Margot Robbie and DiCaprio both give brave performances.

Across the board the performances in The Wolf of Wall Street are top notch. A host of quality actors drop in and out of the narrative – from Matthew McConaughey to Jean Dujardin. Even Spike Jonze makes an uncredited appearance. Hill has never been finer – his power-mad, slightly camp portrayal of Azoff ultimately casts a very lonely, desperate figure. Australia’s stunning Margot Robbie gives a brave star-making performance as Belfort’s second wife Naomi and holds her own against DiCaprio during the movie’s most emotionally traumatic scene. You never feel like you get to know Naomi beyond her trophy wife status, but this is largely due to Belfort’s lack of interest.

In the story of The Wolf of Wall Street, Scorsese has found the material for his own version of Scarface. And just like Brian de Palma’s classic 1983 movie, which Scorsese is a big fan of, The Wolf of Wall Street says that the real “American dream” is not achieved through hard work – it’s not a white picket fence, a modest income, a wife and three kids. America is not “a land of opportunity” but a chance at opulence.

The American dream is built on an inherent, blind thirst for money. It is built on greed, and it is there in the faces we see in the final frames of The Wolf of Wall Street. It’s a fantasy that Belfort managed to achieve with his yacht, helicopter, sexual conquests, Quaaludes, fast cars and mountains of cocaine. It was acquired through deceit on a gargantuan scale. Belfort preyed on people desperate for wealth – investors who wanted to cut corners. A quick dollar. And, as Leonardo DiCaprio’s anti-hero cheekily suggests in his voiceover, other people would behave like him if they knew how. He is daring you to like him and understand him.

DiCaprio’s casting as Belfort is crucial to the moral ambiguity of The Wolf of Wall Street. He is charismatic and addresses the audience on numerous occasions with honesty, charm and a twinkle in the eye. As his riches and fame increase, you soon forget his complete moral bankruptcy. You get lost in the drug-fuelled, blurred whimsy of it all. And, most tellingly, who find yourself barracking for him. You want Belfort to beat the spoilsports of the FBI. You want him to win. 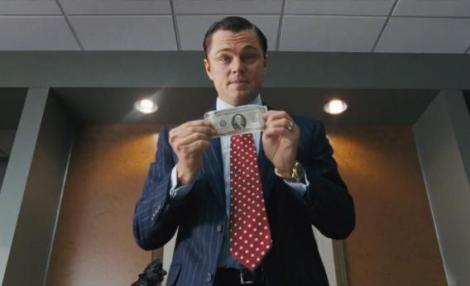 MONEY, A DRUG: The Wolf of Wall Street is about the seduction of financial power.

This is why The Wolf of Wall Street might leave its viewer with an unsettling confusion about what they’ve just witnessed. Because Belfort’s well-documented downfall is a very small percentage of the film’s 179-minute running-time. The majority of the screenplay, written superbly by Boardwalk Empire creator Terence Winter, is glorifying Belfort and his co-worker’s grotesque behaviour. There are multiple scenes that only exist in the film as an opportunity to revel in Belfort’s sordid world.

In The Wolf of Wall Street Scorsese is returning to themes from his 1990 movie Goodfellas (which was based on non-fiction book Wiseguy). Goodfellas charts another rise and fall – in this case Ray Liotta’s character Henry Hill. But in that film the protagonist is punished for his criminality by being condemned to live in the real world – imprisoned by a generic suburban home and a dressing gown. Belfort suffers a less tedious fate – here we see him celebrated in a large Hollywood adaptation of his own work (the real Belfort even has a sneaky cameo in the final scene). Book sales from the success of this film will again make him a rich man, as will increased interest in his public appearances. Despite 22 months in jail, Belfort’s fun has continued.

It’s this message that gives The Wolf of Wall Street teeth. We don’t live in a world that condemns Jordan Belforts. We admire them. Buried in The Wolf‘s sparkling indulgence, simmering beneath the surface, is a mournful message of despair. Scorsese has not only forced us to examine our own desires but has also documented a terrifying downward spiral in human values, decency and compassion.

One response to “The Wolf of Wall Street: review”