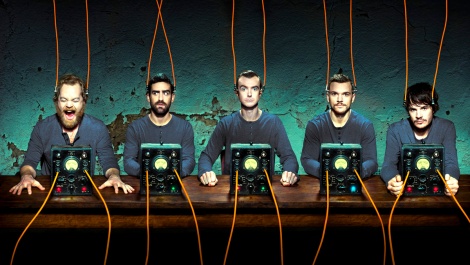 Karnivool does nothing on a small scale.

The Perth progressive rock group’s monstrous third record, Asymmetry, took 12 weeks to make. It debuted at number one on the Australian album charts and won the Aussie group an ARIA for Best Hard Rock Album. In between was a five-and-a-half week tour of Europe.

“The shows were amazing – there was real [fan] growth everywhere,” guitarist and co-songwriter Drew Goddard says.

Karnivool’s tour started in Amsterdam and worked its way through France, Belgium, Italy, Switzerland, Germany and finished in England and Scotland.

“It was about the fifth time we’ve been [to Europe] and they were really cracking shows,” he adds.

Given their global popularity both here  and abroad – they played to more than 1500 ­people in Cologne – Goddard admits that the band members were confident Asymmetry had the chops to nail a number one chart position.

“To be honest, it wasn’t a complete surprise,” Goddard says. “We got the [sales] report midway through the first week and we knew that as long as weren’t up against something huge [we could reach number one]. It’s nothing that we had intended, but it didn’t take away from the feeling when it ­happened. It was awesome to have a number one and we just thought it was a really solid win for alternative music in this country. It’s better that it’s Asymmetry [at number one] then The X Factor‘s runners-up.”

Karnivool are touring with fellow prog-rock purveyors Dead Letter Circus and post-­rockers Sleepmakeswaves. It won’t be the first time these acts have toured together. Karnivool took Dead Letter Circus on the road as their main tour support when they heard the emerging group’s first EP in 2008. The two bands have remained friends. Sleepmakeswaves have also toured with Karnivool.

For Karnivool’s Hunter fans their show at Newcastle Panthers on Thursday will be the first chance to hear the large ambitious tracks from Asymmetry live. The album was recorded between Byron Bay’s 301 and the band’s own recording ­studio and was engineered by former Oakhampton resident Jordan Power. The album is intricate in detail and the songs are dynamic and thunderous.

The members of Karnivool, who share their lead singer Ian Kenny with rock band Birds of Tokyo, don’t have clearly defined songwriting process – they just follow their instincts.

“There’s no common place that [the ­songwriting] starts,” Goddard says. “It could be a guitar riff, it could be a weird sound or a rhythm. Even before it becomes a riff it’s a set of notes or a vibe. Sometimes it also comes from a jam where you’re not even thinking about it at all– you’re just messing around and you’ve got half a song. Once [a song] came from just a lyric. When something works you just roll with it and see where it takes you.”

Because Kenny divides his time between two successful bands – he was Australia’s first lead singer to have a number one record with two different acts in the same year – Karnivool often write the beds of the tracks without their vocalist.

“Kenny’s away most of the time these days, so when he comes in we will have a bunch of music and we’ll say ‘sing on this’,” the guitarist explains. “We’ll think the music’s going in a certain direction and then the vocals might fire it off in a direction that we didn’t think it was going in. That lights the path ahead for the song, then [Kenny’s] off again and we’ll say, ‘Thanks for the clues, mate, we’ll get back to it.’”

Given the layers and atmosphere of Karnivool’s music, and the long recording process, it can be difficult for the group to know when a song is complete.

“Sometimes it’s really obvious – structurally, anyway,” Goddard explains. “Sometimes you have to refrain from adding stuff when it doesn’t need it. The song is never really finished for me – it’s always just abandoned. You just have to go, ‘That’ll do pig.’”

The order of the album’s tracks is another series of creative decisions. “You have to see the forest for the trees,” Goddard explains. “And see where a song fits into the bigger picture. It’s a matter of getting [the track order] to flow – you have to get all the peaks and the troughs right so it doesn’t labour anywhere and it gets exciting in the right places. That’s important to us – to get the overall flow right.”