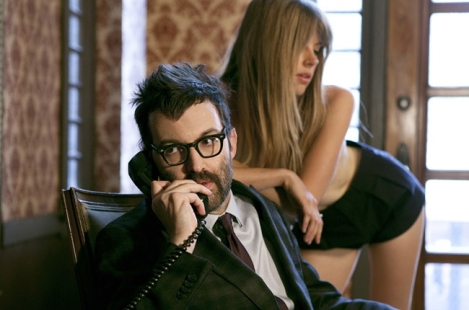 PHONE INTERVIEW: Mark Oliver Everett chatted to me over the phone from Los Angeles, possibly with a glamour model in his vicinity.

If every other music journo is like myself, they probably have a list of dream interviewees. It’s also a question you get asked by people. “If you could interview anyone, who would it be?” I have such a list. It includes James Dean Bradfield (Manic Street Preachers), Jonas Bjerre (Mew), Leonard Cohen, Neil Young and Gaz Coombes (formerly of Supergrass). Until very recently, this list also included Mark Oliver Everett, aka E, of Eels. But I recently had a chance to speak with him. The interview came about very quickly and I would have liked more time to properly structure my questions for him. Because he is a man of few words, I would have liked to have pushed him slightly to elaborate on his views of the themes in his music. But such are the trappings of a 15-minute time slot. You can only ever skim the surface. Nevertheless, it was a privilege to be able to speak to this incredible songwriter and author. Here is the transcript of our conversation.

You’ve been visiting Australia since about the year 2000. Have we always been receptive to your music?
I think so, you’d have to ask them. They’ve always seemed like nice audiences to me.

Last time you were here was the Hombre Lobo tour, which had a distinctly rockier vibe. What can we expect from your upcoming tour? Will it be mostly material from your new record Wonderful, Glorious?
Yeah, it will be some of that and probably plenty of older material too, all mixed together I’m guessing. And I think the focus is going to be on having a good time.

When performing your older songs, do you ever find that the meaning and sentiments of certain lyrics apply to your life in different ways over time?
It’s so much fun to go back and revisit older material, but try to get it right this time. We say, ‘Let’s treat this song as if it was written yesterday. How would we have done it this time?’ That makes it a lot of fun.

Do you consider yourself a perfectionist when it comes to songwriting?
No, I’m just trying to capture some sort of truth, or some real moment. I guess in that sense you could say I’m a perfectionist. But there’s nothing perfect about that, so I guess not.

…you could say my life has been a long series of painting myself into corners and then desperately trying to find a way out of them, and that’s the challenge I guess I thrive on.

Your most recent album, Wonderful, Glorious, was much more collaborative than your previous records. You co-wrote the album with your Eels band members. Did you surprise yourself to be co-writing with other people?
Well that came about solely because we had toured together for several years – we’d been around the world several times together. And it occured to me that they’re such a great band – why weren’t we making new music? That’s what opened the door to that idea. Now we get to go out and play the stuff that we all wrote together, so it’s really fun.

You said that after making the thematic trilogy of records – 2009’s Hombre Lobo, 2010’s End Times and 2010’s Tomorrow Morning – you had painted yourself into a corner, creatively. Have you found yourself in that situation many times, where you didn’t know where to take your music next?
Yeah, I guess you could say my life has been a long series of painting myself into corners and then desperately trying to find a way out of them, and that’s the challenge I guess I thrive on.

Did collaborating help you out of the corner?
Yeah because it was initially a little bit scary, because I didn’t have any plan when going into make this record. I’d never done that before. I always had some idea of what I was trying to achieve. This time I just said, “Let’s meet on this day, at this time and see what happens.” After a few slow hours it started to click, and then it never stopped clicking after that.

For the next album, do you think you would use the same collaborative process?
Probably not. I’m sure I will want that kind of approach again, but since we just did it I doubt I would do it right away again like that. But who knows.

Are you in a position now where you have an idea of what you might do next?
I have so many ideas, that’s the problem. I just have to pick one.

Do you get restless if you’re not working on new material or do you like to take a break from songwriting?
It’s nice to have a break once in a while, but there’s such a natural, built-in break when we go on tour. Then you play the hell out of the stuff you just wrote. Naturally, by the end of that you’re ready to go back to the other side of it – the writing.

You sometimes write lyrics from the point of view of a character and other times as yourself – does one perspective come more effortlessly than the other?
It might be easier to write something that’s strictly autobiographical, because you know all the facts going into it. So it might be more of a challenge, to write as a character.

…my goal for the rest of my life is for it to be too boring for it to make a good book. I packed in so much drama in the first half, I don’t really want any more.

Before making an album do you have a sense of what the lyrical themes might be or do you wait for the music and melodies to inform that?
Both things can happen. I normally have some idea of what I want an album to be, lyrically and musically, ahead of time, with the exception of Wonderful, Glorious, where I didn’t have any idea of what I was getting into.

Do you feel that lyrically you are drawn to different subject matter now than what you might have been as a younger man?
I think it has moved around over the years, but there are some themes that are universal and able to be endlessly explored, I think.

I loved your autobiography, Things The Grandchildren Should Know. In it there is a serendipitous moment where you’re on a bus with influential music industry figure John Carter and you hand him your demo tape. That sets in motion a chain of events that leads to a recording contract. Had that not happened, do you think you would have remained driven to make music for a living?
Yeah, it’s hard to say. I had passed so many tapes to so many people, prior to that. It never went anywhere. Initially that [meeting with Carter] didn’t go anywhere, but eventually it did. I’m very thankful that that happened. I’m guessing that it probably would have happened eventually, some other way. But who knows.

What was it like to write your autobiography and release such a personal document for people to read?
It’s a little terrifying, because it’s so embarrassing. Whenever I meet someone that’s read the book – like when you just told me you read my book, I immediately felt this pain in my stomach. You know a lot of embarrassing things about me. So that part’s a little hard, but it’s ultimately a very freeing experience. Particularly if it’s well-received. And then you feel like, “Well, ok, I went out on a limb and no one is laughing at me – too much.”

Your book is a compelling read and I loved it. Do a lot of people ask you about whether you’re going to write more – whether it be fiction or a second autobiography that documents the last half of your life?
Maybe, but my goal for the rest of my life is for it to be too boring for it to make a good book. I packed in so much drama in the first half, I don’t really want any more. Most of that is out of my control, so who knows. Maybe writing fiction or something… it’s really hard to write your own story in a book because it has to be factual and entertaining. But if it’s fiction you can just make it up and it doesn’t matter where it comes from. That seems a lot easier to me, but writing a book is a little too lonely for me to get excited about doing it again any time soon.

If someone had played you Wonderful, Glorious back when you were releasing Beautiful Freak in 1996, and said here is an album you will release in 2013, would anything about the record have surprised you at that point in time?
Yeah, I think I would have been flawed by how awesome it is. I would have thought, “Wow, I’m capable of that? What am I doing?” It’s hard for an artist to judge his own work and it’s hard for me to say, but I always look back on stuff in the past and think, “Er, that was a young man. I could do that better now, or differently – in a way that would be, in my eyes, better.”

It seems that when someone becomes a member of Eels, it’s important that they have an awesome nickname. Eels comprises of The Chet, P-Boo, Honest Al and Knuckles. Is a great a nickname a prequisite for being in the band?
It seems to be. I don’t know how exactly that started or why it started. But once it started we were never able to get out of it. I tend to be a nicknamer with people, in and out of the Eels. You don’t have to be in Eels for me to give you a nickname.

Eels are out in Australia for Harvest this year. What are the band’s plans for after that tour?
We’ve already done 54 shows this year and we’re getting ready to go back out and do a bunch more before we come to Australia. We’ll be well oiled up for Australia, and that’s really all we’re focusing on right now.

So after Australia it might be time to make another record?
One would think, based on history, that’s probably what will happen at some point. But I don’t feel like there’s any hurry, so who knows.