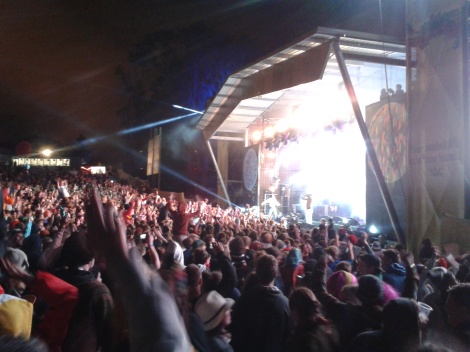 The last few months have been full of lots of great live shows (I do love my job), but there’s plenty more on the horizon. As I haven’t blogged in a few weeks due to furiously writing my second project, I thought I would take a moment to reflect on the good shows and festivals.

Here’s a wrap of what I’ve been covering:

The beautiful Amanda Bevan (my girlfriend) and yours truly, inside the Falls Festival VIP tent. New Year’s Eve 2012.

Last year’s Falls Festival in Lorne, Victoria was my sixth time at the event. It’s by far the best festival in Australia and it remains a personal favourite of mine. I get sentimental about it because I have a lot of really special memories from my times there. It is an incredible way to welcome a new year and I hope to keep going back for a long time.

It’s a beautiful journey to Lorne along the Great Ocean Road. The venue is away from civilisation and is a perfectly shaped natural amphitheatre. You can see and hear from everywhere. The audience are always awesome – they can get rowdy but not in an aggressive or intimidating way. Beer is only six dollars! The people that make the pilgrimage there go for the music.

Musical highlights were First Aid Kit (who are are not only perfect looking, but have the harmonies of two angels), Hot Chip, Bombay Bicycle Club, Beach House, Cosmo Jarvis, Two Door Cinema Club, Maximo Park, Coolio and The Hives.

The Flaming Lips were disappointing. Despite all their colour, they’re set was musically bland and boring. A shame.

Watching Morrissey four rows back at the Sydney Opera House is a show I’m unlikely to forget. It surreal to be so close to the man as he performed and to hear that unmistakable, warm yet sorrowful, voice appear so effortlessly. He straddles sincerity and wry humour, carrying his dour demeanour as a bittersweet burden while a twinkle glimmers in his eye. Morrissey fans understand this dichotomy and relish it. He is woeful in the best sense of the word.

Morrissey opened with Every Day is Like Sunday and then played a set that would have disappointed very few, with songs like You’re The One For Me, Fatty, Meat is Murder, Irish Blood, English Heart and the explosive finale How Soon is Now?.

But the highlight – and definitely one of my all-time most momentous live experiences – was when Morrissey performed my favourite Smiths song, I Know It’s Over. It was overwhelming to witness him sing that song live.

BIG W: Weezer on stage in Sydney after a 16-year absence.

After 16 years away, Weezer almost made it up to their Australian fans with a brilliant performance at Sydney Entertainment Centre. The first half of the show was a greatest hits set – ‘Beverley Hills’, ‘Pork and Beans’, ‘El Scorcho’, ‘Hash Pipe’ and ‘Troublemaker’ – then they played The Blue Album from start to finish. That turned into a giant singalong. Tunes like ‘My Name Is Jonas’, ‘Buddy Holly’, ‘Surf Wax America’, ‘Say It Ain’t So’ and ‘Undone (The Sweater Song)’ had the crowd singing in jubilant chorus.

As good as the set had been, I hadn’t heard my favourite Weezer song, ‘Island In The Sun’. But the band returned for a final encore and JUST played that particular track. It was the perfect ending to the show and I couldn’t have asked from anything more from them. The crowd was satisfied. They had better not take another 16 years to return.

MAN VS WILD: Lost my left thong at Big Day Out 2013 but located another that fitted perfectly.

Big Day Out is always a warm event, so it made perfect sense that this year’s festival take place during Sydney’s hottest day in recorded history. Even though I got crushed and lost one of my thongs (I was able to improvise: see above image), it was worth it to see the great Red Hot Chili Peppers for the first time. They played a greatest hits set. I was happy.

It was also nice to see a full Yeah Yeahs Yeahs set where you could hear Karen O’s voice. True story: When the Yeah Yeahs Yeahs performed at Falls Festival in 2009, Karen O’s pink wireless microphone worked for only ONE song. Yes, one song. It was a YYY instrumental set. Loose.

My full review is here: Hottest Big Day Out in history

There was an error retrieving images from Instagram. An attempt will be remade in a few minutes.