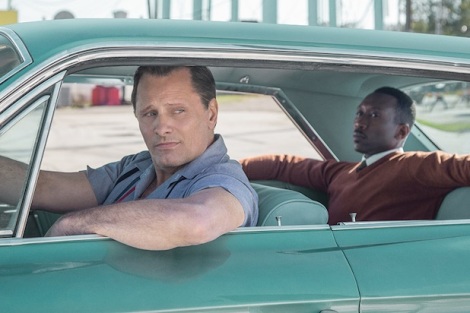 The Green Book, written and published by its namesake Victor Hugo Green, was a travel guide for African Americans. Printed in the 1960s, the handbook listed safe places to eat and stay, particularly in the Deep South where the Jim Crow segregation laws were in full flight.

The metaphor fits neatly over Frank “Tony Lip” Vallelonga (Viggo Mortensen), a New York City Italian heavy who works as a bouncer in a nightclub. Tony Lip has a reputation for solving disputes with his fists. He’s approached by a record label to drive and safely escort one of their star musicians, black virtuoso pianist “Doc” Don Shirley (Mahershala Ali), on a tour through the Deep South, where racism is still indulged and enacted with chilling casualness.

The opening scenes of Green Book, based on a true story, tell us that Tony Lip is prejudiced against black people. But he’s out of work for two months while the nightclub where he works is renovated, so he takes the job to guide the Doc on his tour. They clash at first. Tony’s an every man, uncultured in any global sense of the word. Doc, on the other hand, is extremely cultured – well-travelled, eloquent, multi-lingual and, as far as Tony’s concerned, incredibly pompous.

From here the film becomes a road movie – a reverse Driving Miss Daisy – that takes us on a tour of the Deep South’s racist landscape. America is in a state of flux, and we see the contrast of progressive New York City, where Shirley lives in opulence above Carnegie Hall, sitting on a literal throne, to the likes of North Carolina, where he can’t use the same bathroom as whites people. But Green Book never wallows in the barbarism that African Americans experienced during that time – it’s not that kind of film. This isn’t Django Unchained or 12 Years a Slave. Green Book has a gentle approach, instead focusing on the personal indignation experienced through Shirley’s character. Humiliating scenarios are woven into an ultimately heart-warming story about two people who find common ground.

Green Book is ostensibly a story that’s been told many times before, its tropes steeped in the “buddy movie” tradition. Two characters from different worlds, with different outlooks and methods of social interaction, are brought together through circumstance. Of course they’ll end up the closest of friends. But, more vitally, they will learn from one another through their shared experience.

Green Book is a decided change in tone for director Peter Farrelly, of the Farrelly brothers, whose run of sweet yet gross-out comedies yielded the hits Dumb and Dumber and There’s Something About Mary. It’s a sincere and wildly enjoyable film, gently paced, very funny and written with a literary sensibility, the narrative a series of small and profound moments. It’s a story about two people first, and a story about racism second. Its political ideology doesn’t bludgeon the audience, nor is it pushed to the edges. Farrelly and his co-writers – one of which is the real life son of the Tony Lip character – locate grim humour in the ludicrousness of the Jim Crow laws, and the Doc’s various humiliations play out in a dualistic nature, devastating and absurd in equal measure. These moments are intended to sicken us and that’s precisely where they land. And Green Book is, unavoidably, a sad reminder that the vileness of segregation is not only recent history, but still echoes today.

While beautifully made by Farrelly, the success of Green Book is carried by the brilliance of its two central performances. Outside of his work with David Cronenberg, Mortensen rarely gets the chance to showcase both his precise comedic timing and blunt force physicality. Ali plays Shirley with startling nuance – dignity, melancholy, pain and fearlessness. One would think he is assured his second Academy Award.

Green Book has been criticised in some corners for dumbing down its depiction of the Jim Crow laws, and Shirley’s family have accused the writers of fabricating the depth of Tony Lip and the Doc’s friendship. If these things matter to you – the odd requirement of absolute historical accuracy in a fictional work – then perhaps they’ll mar your enjoyment of the movie. Which would be a great shame.

But fiction and truth remain strange bedfellows and films, depending on their underlying sentiment, should remain immune to such scrutiny. The search for truth in any film is ultimately futile. “Facts” are not necessarily beneficial to a piece of art and it is true that ideology is often detrimental to storytelling. In regard to Green Book, this need for “truth” has blinded some to the filmmakers’ ultimate achievement, a long series of memorable moments that together form a modern classic.