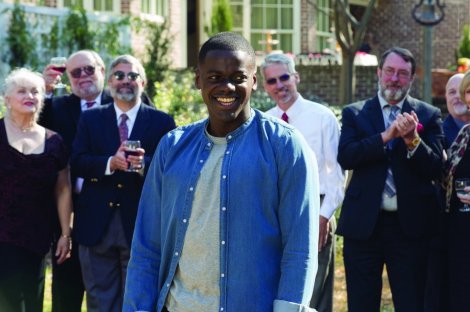 JORDAN PEELE HOLDS UP A BLACK MIRROR TO WHITE LIBERAL CONDESCENSION IN THE FUNNY AND TERRIFYING HORROR SATIRE GET OUT.

“I would have voted for Obama for a third term if I could. Best President in my life time, hands down,” says Bradley Whitford’s Dean Armitage in a nice guy routine to Daniel Kaluuya’s Chris Washington. It’s the same on-the-nose but well-meaning condescension that Ricky Gervais’ David Brent uttered when espousing his love of Sydney Poitier to a black co-worker in the original UK version of The Office.

Though Gervais made that gag 15 years ago, it’s just as stinging when delivered in a modern horror movie, albeit an incredibly biting and hilarious one.

Get Out has received universal acclaim since its release in the States last year, and still holds a 99% approval rating on the Rotten Tomatoes review aggregator website. There’s no doubt many of the critics who have helped boost this consensus to such dizzying heights are white progressives, thus creating a cyclical vortex in which writer-director Jordan Peele’s cutting observations of white liberal culture and racism are cannibalising themselves like a snake eatings its own tail. Because the bad guys in Get Out are not the white-hooded Klan members of Mississippi Burning. They’re middle to upper class white Obama voters, identifiable and relatable to many, and all the more chilling antagonists in a film that wield’s modern racism’s double-edged sword.

Get Out finds Chris and white girlfriend Rose Armitage (Allison Williams) getting ready to travel and meet Rose’s family after five months of dating. Chris is worried about how he’ll be accepted by the Armitages, as they don’t know that he’s black. But the couple receives a warm welcome from Rose’s family. They’re neurosurgeon father Dean (Whitford), hypnotherapist and psychiatrist mother Missy (Catherine Keener) and eccentric brother Jeremy (Caleb Landry Jones). They live in a stately country home in a predominantly white, monied community. A real old-world genteel bunch.

But Chris’ initial fear of not being accepted by Rose’s family quickly seems to be the least of his worries – acceptance into the fold could prove far worse. Chris observes some strange behaviour by the Armitages’ all-black staff. There’s something a little too polite and detached about maid Georgina (Betty Gabriel), groundskeeper Walter (Marcus Henderson) and even local resident Logan King (LaKeith Stanfield). Chris calls up his friend Rod (Lil Rey Howery) to share his increasing suspicions and, in a wonderful device that vocalises the audience’s point of view, Rod promptly advises Chris to get the hell outta there. His advice proves rather sage.

“Get Out is imbued with Peele’s keen sense of horror classicism and cleverly uses some of its nods to other films – most notably The Stepford Wives – as a diversion.”

One half of sketch comedy duo Key & Peele, alongside Keegan-Michael Key, Peele’s brand of humour is both unsettling and socially and politically incisive, a mash of Dave Chappelle and The League of Gentlemen. It’s clear his sense of dramatic timing and pacing of reveals has served him well in the horror game, because this is a very impressive entry into the genre.

Get Out is imbued with Peele’s keen sense of horror classicism and cleverly uses some of its nods to other films – most notably The Stepford Wives – as a diversion. The conclusion to which you might have arrived from watching the trailer might be way off the scent. It’s got some unexpected plot twists up its sleeve and a great deal to say about how good-intentioned racism still pervades our society. Peele stops short of being preachy, allowing the horror concept to outweigh the social commentary, and teases an ending that might have made a political statement. But he doesn’t need to. The point has been made.

In the movie’s key sequence, Chris is subjected to a formal afternoon get-together in which most of the town seems to be in attendance, and every cliched exchange like the aforementioned Gervais gaff is hurled at our hero. An elderly white golf enthusiast tells Chris how much he loves Tiger Woods. It’s painful. Peele’s clearly leading us through familiar personal territory. The child of a mixed race couple – his mother is country music luminary Lucinda Williams – it’s likely Peele has heard just about every piece of awkward posturing that white people have to offer.

Though operating as a biting satire and very effective comedy, Get Out works as a horror movie – it’s riddled with genuinely unnerving moments and revelations (the film contains the most chilling bingo scene you’re ever likely to see). Peele’s intuition for his audience is apparent. He’s a conductor and as the credits roll you feel as though you’ve been played like an orchestra. You’ve laughed when commanded and you’ve had a sinking feeling applied to your stomach at just the right moments. The hypnosis central to the plot has somehow leaped from the screen.

Get Out contains a relatively simple premise that’s fresh, relevant and handled with expert precision by the director and his committed cast. Whitford and Keener bring the required malevolent ambiguity and Landry Jones is effective in another simmering, unhinged performance. Williams, known to many as Marnie in Girls, plays a crucial role in Get Out‘s success. Howery steals every scene he’s in, very much the comic relief. The always excellent Stephen Root has a small memorable role.

But high praise must be bestowed upon British actor Kaluuya as our American hero, whose naturalism as an actor facilitates Get Out‘s numerous gut punches. He’s a big talent and, having had smaller parts in Kick-Ass 2 and Sicario, seems at home in a leading role. Kaluuya was particularly excellent as the main protagonist in the Black Mirror episode “Fifteen Million Merits”. It was a prescient performance because Get Out is a “black mirror” of a different kind, held gleefully by Peele in front of modern white society. Peer in and you just might see your own reflection.