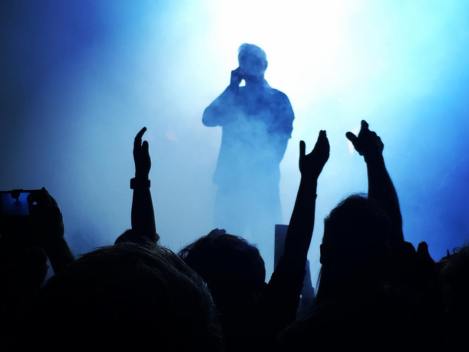 Not many modern artists can claim to induce fainting amongst their audience. Some have tried. Alice Cooper gets his painted craggy noggin lopped off night after night to deafening cheers. Death metal harbours its share of ghouls and depravity. Mainstream American country music is inherently terrifying.

But you best be ready when you’re going to see former Smiths frontman Morrissey. Because you’re going to see something real; hot crimson arcs jetting from the jugular of a freshly slain heifer, broken bones, baby chickens poured into a meat grinder. The flesh production machine in all its glory. It’s the kind of ultra-violent pastiche that temporarily put A Clockwork Orange’s protagonist back on the straight and narrow.

Morrissey is pop music’s evergreen agent provocateur and he’s nothing if not set in his ways.”

Morrissey is pop music’s evergreen agent provocateur and he’s nothing if not set in his ways. A montage of barbaric and uber-graphic animal slaughter commences on a giant screen across the back of the Civic Theatre’s illustrious stage. The song, of course, is ‘Meat is Murder’. A Smiths classic. There’s been no more potent statement made about veganism in popular music. Thirty six years after its release, the once slow and dreamy title track from the band’s 1985 sophomore record is now a venomous, loud, ideological sledgehammer. Morrissey, bathed in vivid red light, points into the shocked crowd as he decries “it is murder!” He then points at the unfolding carnage behind him. A farmer takes a blowtorch to a writhing bull’s horns.

As the intensity of this sensory overload draws to a close, a nearby gentleman faints. This is nothing new. A woman at the previous show, in Wollongong, also fainted. That, of course, is the entire point. Morrissey is confronting 1400 people with unquestionable success. It’s not gleeful. He doesn’t believe in this slaughter. He wants you to be sickened. To bear witness.

This is all part and parcel of a Morrissey show. He seems disinterested, but he’s not. Buried deep inside this God-like, velvet-voiced misanthrope is gratefulness for his legion of fanatical worshippers, but you can be sure as hell that Morrissey is not about to pander or seek cheap adoration. Audience screams of “I love you” come perilously close to provoking a smile, but are met instead with an expression somewhere between discomfort and pity.

His fans try to embrace him. Hold him. They’re overcome. Hysterical. That’s just what they do.”

It’s not all bad though. Morrissey is present, he’s not about to phone it in. Morrissey has stated that he “doesn’t perform”. What he does is real. Tonight he wanders back and forth across the stage, bestowing those in the front row with warm handshakes. Sometimes punters are unwilling to let go, prompting security to rush from the stage’s wings to unclasp reluctant fans. Then, during ‘Jack the Ripper’, multiple audience members rush the stage, trying to latch on to the crooning idol. Moz calmly pulls away as security guards crash tackle these crazed Mozheads, tossing them back into the crowd like sacks of wheat. Morrissey allows a smile, albeit a wry one, because he was expecting this. His fans try to embrace him. Hold him. They’re overcome. Hysterical. That’s just what they do.

What Newcastle has received tonight is a setlist designed for the hardcore followers, of which there are many. The stalls of the Civic Theatre are full of overseas tourists, the unwavering devotees who literally follow Morrissey around the world and attend every show. They’ve seen him thousands of times. They’ll see him thousands more.

For the fair-weather fans, the set is light on Smiths material. This is perhaps because it’s Morrissey’s third tour in five years – Smiths tracks played a larger part of those previous appearances – and we’re only two hours from Sydney. Across his 2012 and 2015 visits, Morrissey performed six nights in Sydney. He’s covered Smiths territory. So far ‘How Soon is Now?’ has been played at every performance on this Australian visit, but it won’t appear tonight, the final date of the tour. It’s replaced instead with a few tracks from the vault.

The night opens with ‘Suedehead’, that sublime hit single from his 1988 solo debut, Viva Hate. Without his Smiths band mates, Morrissey’s approach is much louder and heavier, void of the romantic wash of his early recordings. The well-dressed live musicians on the Civic’s stage are a powerful stadium rock band. Their sound is gigantic, reflecting the rockier direction of numbers like ‘Irish Blood, English Heart’. That track brings the Civic Theatre to life and a glint in Morrissey’s eye suggests the penny has dropped. In Newcastle’s he’s found a fresh pocket of devotees.

The following number is a rare gem – ‘Because of My Poor Education’, the B-side to the 2009 single ‘I’m Throwing My Arms Around Paris’ (the latter also appears in tonight’s set). It’s the first time ‘Poor Education’ has appeared sung live since 2009. Later another rare track appears, ‘Good Looking Man About Town’, the B-side to his 2006 single ‘You Have Killed Me’. It hasn’t been performed since 2007. Morrissey’s reaching deep into the bag. Though rarities are always welcome, ‘Good Looking Man About Town’ feels like too big a lull after the shock of ‘Meat is Murder’ and a red-hot rendition of another Smiths tune, ‘What She Said’.

Other choice selections include the resplendent ‘The World is Full of Crashing Bores’, in which Morrissey, ever the anti-Monarchist, uses Prince William and Princess Kate as the backdrop. Recent tune ‘Kiss Me a Lot’ has a refreshingly romantic bent, as does the 2004 hit single ‘Let Me Kiss You’.

Animal rights are again front and centre in the playful ‘The Bullfighter Dies’, while ‘All the Lazy Dykes’ proves a less interesting interlude (though it does lead into the aforementioned ‘Meat is Murder’ segment).

Before the 20-song set approaches its encore, Morrissey delivers the inevitable shirt removal. With trademark dramatic flair he rips the silken garment, with its plunging neckline, from his impressive physique and tosses the sweat-laced textile into the front row of the audience. Mozheads fight over the prize like starving dogs over an elusive scrap.

The one-song encore is not what anyone could have expected. Morrissey, ever the tease, doesn’t deliver a Smiths classic. Instead, he offers something out of the box: a spirited cover of The Ramones’ ‘Judy is a Punk’. He smiles at its conclusion, leans into the microphone and states with all sincerity, “I love you.”