Leonardo DiCaprio in a scene from the film, “The Revenant.” The movie opened in Australian theaters on January 7, 2016.

The comfort of a home cooked meal and a long hot shower is essential after enduring 156 minutes of The Revenant. Writer-director Alejandro G. Iñárritu’s follow-up to the Academy Award-winning Birdman is cinema at its most visceral and immersive, a bleak revenge tale and survivalist epic that weighs the emotional impact of blood, snow and dirt above dialogue and characterisation.

The premise is simple. It’s 1823 and Hugh Glass (Leonardo DiCaprio) is guide to a military sanctioned hunting party who are traipsing through the cold wilderness of the Louisiana Purchase to fill their quota of pelts. Minutes into the film the group are ambushed by the Arikara native tribe and in a stunningly realised sequence, in which you’re inclined to duck your head as arrows fly at the camera, a small number of hunters escape. The remainder are slaughtered. It’s a bloody and brilliant set piece.

But on this frontier the wrath of the slighted Native Americans is not the only threat. Soon after the party’s escape is The Revenant‘s oft-mentioned bear attack, which is every bit as intimate and painful as you may have heard. In what appears to be a hybrid of CGI and puppetry, Glass is brutally mauled by a ferocious mother grizzly. Slashed and bloody, he is discovered on the brink of death and, after attempting to carry him on the stretcher, the hunting party makes the tough decision to leave Glass behind. His son, a half-Pawnee native called Hawk, refuses to leave his father’s side. Another of the party, John Fitzgerald (Tom Hardy) is offered money to stay and make sure Glass is allowed to shuffle off this mortal coil in peace and relative comfort.

But Fitzgerald grows impatient and decides to expediate the process. In a brief struggle, Hardy’s character kills Hawk and leaves Glass behind. This proves a mistake. 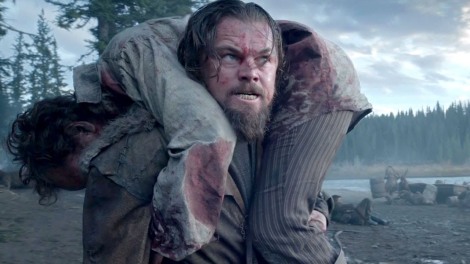 The Revenant is a stark, exceedingly masculine affair and will no doubt lose marks in the eyes of some critics for lacking substance or narrative breadth. The premise may be basic but this is still gripping material. The frontier, as it has so often in cinema, devolves its inhabitants to their most primal animal instincts. This tale could just have easily have taken place in a post-Apocalyptic future, and in many ways the barren landscape and story echo of John Hillcoat’s The Road adaptation. That film, and Cormac McCarthy’s novel, ultimately has greater resonance than The Revenant. Father and son remain together, and the stakes are higher for the parent. The urgency to continue and survive is immense.

Conversely in The Revenant, the viewer’s investment relies on hatred of Hardy’s devious villain. We are required to share Glass’ blind desire for justice if we are to endure moments in which he guts a dead horse to keep warm inside (insert Star Wars joke here) or cauterizes his slashed throat with gunpowder. The quest is exciting and often thrilling, and even though the tension never reaches nightmarish levels there is something hypnotic about the journey. Iñárritu prevents the film from sagging during its bloated running time. The landscape is alive and it breaths all around Glass as he drags himself ever onward. The wind whispers through the trees, captured by tranquil shots where the camera looks directly upward to the sky above.

DiCaprio – indeed all the cast – are completely invested here. You are left to wonder how close the Hollywood superstar came to either frostbite or hypothermia. One scene, in which Glass gags as he chows down on raw bison liver, was apparently not a planned reaction. So “method” performance has been somewhat redefined in The Revenant.

Though he says very little, you are left with a textured sense of Glass as a man. He is selfless, brave and loving. A survivor. DiCaprio conveys all this and certainly deserves to win the Academy Award for Best Actor. Hardy, too, brings layers to the backstabbing Fitzgerald as a man broken down by the brutality of life. And, despite what you may have heard, you can fully understand Hardy’s dialogue in spite of his mumbled Southern drawl. His “squirrel monologue” is one of The Revenant‘s best moments.

The Revenant doesn’t need to contain a profound message, particularly when it doesn’t pretend to have one. Iñárritu knows the escapist power of cinema. He has demonstrated his ability as a master craftsman and again revels in long seamlessly choreographed takes and artistically composed framing. This type of big-budget visual epic, one that plays to the strengths and scope of the medium, is becoming increasingly rare. The finesse on show here, indulgent as it is, can only be admired.

But if a bow must be drawn, and a thematic thread pulled from The Revenant‘s drawn-out carnage, it’s this: the core of our humanity is two-fold – survival and nurture. For Glass, his life lay with his son. For the grizzly bear, her cubs. For the Arikara Indian chief, his daughter. When what we protect is taken from us, the rage is almighty.