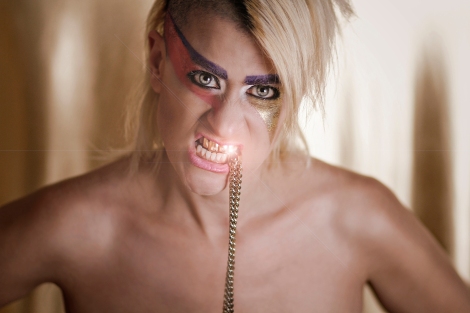 The contrast between the wild stage antics of Peaches and the musician and visual artist Merrill Nisker is at once vast and also makes perfect sense. They are, of course, two sides of the same coin – and that coin happens to be a creative tour de force. Since the release of Peaches’ fifth record I Feel Cream in 2009, the Toronto-native has performed a one-woman rendition of Jesus Christ Superstar (Andrew Lloyd Webber tried to stop her), developed and performed a rock opera about her own life – and its common misconceptions – called Peaches Does Herself (which was filmed and released at Sundance) and even tried her hand at Italian opera in L’Orfeo.

Now Peaches has returned to the studio and created the follow-up record to I Feel Cream – a collaboration with Vice Cooler (XBXRX and Hawnay Troof). I spoke to the entertainer from Berlin, where we discussed her upcoming extensive Australian tour, the new album and working with Kim Gordon.

How long have you lived in Berlin now?

Fifteen years. And last year I half moved to LA. I made the whole new album in LA, I bought a little house and did the whole album in the garage.

What drew you to work in LA?

I don’t know, I guess the lifestyle. Being able to have physical space and your own little house, and the weather. The normal stuff. There’s also a lot of great people there, as there are in Berlin. It’s good.

How does your new record’s sound compare to your last record, 2009’s I Feel Cream?

It’s sounding really good! (laughs) The actual sounds are really quite defined, I’m really in love with this album. It’s still very classic ‘my style’, and there’s a lot of rawness – I like it.

Did you go into the making of the record with a clear idea of what you wanted to achieve sonically?

Yeah, in the way that I wanted to continue in my classic style but sonically have it… I don’t know how to put it. It’s raw, but high-end raw, you know? It’s quite minimal still, it’s dirty but really pleasurable to listen to.

…the real superpower is that I can actually entertain you with a microphone, even if I was just in my underwear or my socks.”

How long did the album take to make?

I did this album together with my friend Vice Cooler and we just spent 10 hours a day working, and I literally had nothing written before. There was no music, nothing. We were seeing what we could do right there, which was great because with the last album [I Feel Cream] I did a lot of demoing – by myself, and I worked with Simian Mobile Disco mostly. And that was quite different, because as producers they would rather, from the ground up, demo all the songs. And with the other albums I wrote them all myself, with the exception of maybe two songs. So this [new album] was a complete collaboration with a friend that I trusted, that I could say anything in front of, which is really special – for both of us.

You’ve done a lot of collaboration over the years, being invited to work with people like Christina Aguilera and R.E.M., plus also having people guest on your own records. Is there a particular quality that you look for in people that you choose to collaborate with?

Usually, for me, collaborations just come up. The two that you mentioned, that was them asking me to collaborate. On this album there’s a few collaborators. My main collaborator is Vice Cooler, who’s just a good friend. He has great computer skills and comes from a complete noise background. It just worked. But there’s another song with Kim Gordon on the new album. She was amazing, because she came in [to the studio] and we just played her the beat and right away she latched on to it and got a great hook out of it. Which for me was really incredible to see, how quick she can work. She’s so used to experimentation that it doesn’t really matter if it’s noise music or a dance beat, she can just go with it.

I imagine this new record must come with a whole new live show too. Is that something you’re working on at the moment?

It’s funny, I really want a lean, mean, back to basics show. I think my superpower is that I’m a performer. There’s so much great technology and I have taken advantage of it, but I think the real superpower is that I can actually entertain you with a microphone, even if I was just in my underwear or my socks. So I think that’s a very important element to focus on for 2015, to make [the show] special in terms of something that you need to be there to see. Obviously there’s Youtubes all the time and everything’s so disconnected in terms of a real experience, that’s why I want to focus on [the performance].

In recent years you have been in three stage productions – your solo performance of Jesus Christ Superstar, your own musical Peaches Does Herself and also singing Italian opera in L’Orfeo. Have those experiences changed you as a performer?

Those were quite different. For me the most incredible experience was singing all of Jesus Christ Superstar. I sang the whole thing, and that was about seeing if I could memorise it all without panicking on stage, because it’s not my own material, and also being able to sing in all those different voices. Which is something that I don’t choose to do with Peaches. But it was incredible to stretch my voice in that way. And, also, in that production, and in the opera, there was a lot more standing still and letting the voice carry a lot of the show instead of running around like a maniac like I usually do.

When you’re working on a new record do you give any thought to how the songs will translate to the stage?

Yeah, it’s funny, I never really think about how they are on stage until after the whole album is written. With the first two albums, The Teaches of Peaches and Fatherfucker, I had no need for a band. Then when Impeach My Bush was done, I was like ‘this is a glam rock band album’. This album too, it’s a good lean machine.

I’m sure that there will be some people who wonder why I’m acting like Miley Cyrus or something. They’ll be like, “Why does that old lady think she’s Miley Cyrus.”

What sort of live band will you bring to Australia in 2015?

It will just be me.

Is Australia a part of the world that you enjoy performing in?

Australians are very open and very passionate and a great audience. I’ve made a lot of incredible friends and I’ve actually collaborated with a lot of Australians – my first dancers were from Australia, imported.

You’re doing the Groovin the Moo tour this year, which takes international artists outside the capital cities that they would normally visit on an Australian trip. Are you looking forward to exposing new people to your live show?

Yeah, it’s really cool to be playing not the usual suspect major cities, which is what I usually do all around the world [play regional areas]. Some smaller towns obviously will not know about me and I’m excited to infect them (laughs).

Groovin tends to be a younger audience, so I’m looking forward to seeing their reaction when you come out on stage.

Yeah, me too. It’s interesting when you’ve been doing a particular thing for 15 years now, and I’m sure that there will be some people who wonder why I’m acting like Miley Cyrus or something. They’ll be like, “Why does that old lady think she’s Miley Cyrus.”

Little do they know, it’s the other way around – she’s copying you.

Do y0u have any other projects in the works? 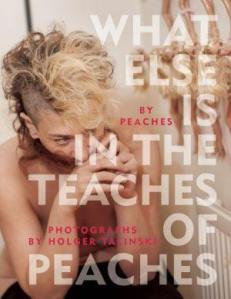 There’s a coffee table booking coming out [What Else Is In The Teaches of Peaches] – a collaboration by me and a photographer named Holger Talinski. He’s been following me around for six years now, and that also includes some essays written by Michael Stipe, Yoko Ono and Ellen Page. It’s a good cross section of on-stage, off-stage life.

Friday 1 May – The Hi-Fi, Melbourne

Wednesday 6 May – The Hi-Fi, Brisbane