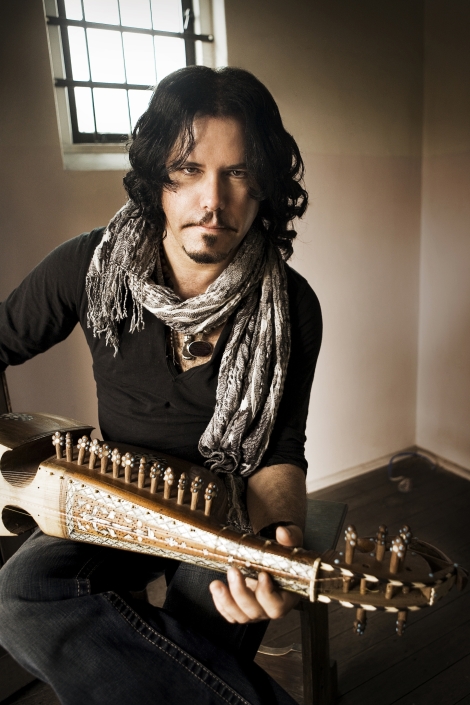 Jeff Martin of The Tea Party

Canada’s stadium-sized rock trio The Tea Party have returned from a decade-long hiatus with a powerful musical statement – an eighth studio record called The Ocean at the End. The title seems an appropriate metaphor. If the path back from their acrimonious break-up in 2005 was a journey of self-discovery, then that chapter is at an end. The destination is this vast musical ocean that appears on The Tea Party’s new album: pure, elemental and timeless rock music. I spoke with vocalist and guitarist JEFF MARTIN about the band’s triumphant return.

How are you finding the process of discussing The Ocean at the End with music journalists?

“With The Ocean at the End there’s a lot to digest. You know when a band knows their record inside and out, and they start the process of interviews and it’s the same answers [in every interview]? Well I’m not really at that point yet, because I’m still trying to figure it out myself.”

When The Tea Party officially ended its hiatus with 2012’s Reformation Tour, was the plan to also release a new record or did you want to wait and assess the response from fans first?

“It wasn’t about gauging the response of our fans, it was more about gauging the response from ourselves. How did we feel? There were three things that we needed to prove. One was that the band could go on stage and own it again, and be one of the great rock bands in the world. We proved that, we proved that that could happen, and [we were] even better than before we took our hiatus. The second thing was can we find the brotherly love that we once so passionately had for one another. And, without going into it, I needed to prove to Stuart [Chatwood, bassist] and Jeff [Burrows, drummer] that I was once again captain of the ship. They wanted me to prove that to them. If we were going to go into a studio, I had to be that captain. Once we were all satisfied with that, then it was like, ‘Yes, ok, if The Tea Party is going to make a record then we have to make a record that stands up to anything we’ve done in the past. That’s a big call. So the three of us decided to take our time, and not rush this. If we were going to put 11 songs on a record, then every single one of them had to be one of the greatest Tea Party songs.”

The three of us are our own worst critics, there isn’t a music journalist out there that can be more critical than we are.

I read that the band recorded the album in a Toronto studio across four different sessions over an 18-month period. Why did you break up the recording process in that way?

“It was to let the record organically take shape, then we could sit back and look at it and see how it was growing. And I really took my time with the lyrics because I wanted the words to paint those musical pictures properly and resonate with it all. The three of us are our own worst critics, there isn’t a music journalist out there that can be more critical than we are. When we say this is definitely one of the best things we’ve ever done, we mean it.”

Sonically, what did you want to achieve with this record?

“I certainly wanted to get away from where Seven Circles ended up going, and even The Interzone Mantras. [Editing software] Pro Tools and all that stuff. That is not The Tea Party. The Tea Party is done on an old Neve [mixing] desk with Fairchild compressors, everything is analogue. And a big room so I can capture that beast called Jeff Burrows. So all of my mic’ing techniques and everything I’ve learned since the inception of The Tea Party, I recollected it all. I put it all on the table, so all of my cards were dealt.”

Did you take song ideas into the studio or did you write why you were in there?

“No, we had two writing sessions. One was in Byron Bay while I was still living there. The other, which was the longer of the two, was in Windsor, our home town. Which was great because my mother was gravely ill at the time, so it was great to spend time with her. She passed away about a month ago. But it was great for us to be back where it all started, and we were writing as a band. It wasn’t me coming to the band with an idea. It was the three of us, facing each other, no gimmicks, just raw talent.”

So the atmosphere in the studio was very different to the making of 2004’s Seven Circles?

“Oh, very different. First of all, no outside influences which was necessary. And it was absolutely my fault, but back in those days the studio turned into a rock ‘n’ roll circus and it was a party all the time. Not now. We had great fun, but the work ethic was just stunning, it was great.”

When you’re writing and recording do you give any thought to how the songs will translate to the stage, or do you worry about that later?

“Well, I’ll tell you this, we tried to stay away from a lot of keyboards on this record. Because Stuart definitely wants to be playing bass a lot more. I think the only conscious thing we did was that Jeff and Stuart begged me to make this my guitar record and reclaim the territory. With the guitar solo in [title track] ‘The Ocean at the End’, I’ve got some very serious, serious musos whose opinions I rate the highest, and for them to say that is one of the greatest guitar solos ever, I’m just like, ‘Thank you.'” (laughs)

You’ve spoken in the past about the personal journey you went on during The Tea Party’s hiatus. How did that self reflection permeate the lyrics and themes on The Ocean at the End?

“My studies, as far as Thelemic philosophies are concerned, were reignited during the time away from the band. That has played a very big part on my personal spiritualism and on my abilities to have absolute focus at any given point. That’s probably the most important [influence] – the ‘love is the law, love under will’ factor. This is my motto and it’s what I live by.”

Water is a recurring piece of imagery in the lyrics. What does water symbolise for you?

“Esoterically speaking, water is a conduit for our emotions. What I’ve shown on this record, poetically, is quite a kaleidoscope of emotions that are being expressed. You need a conduit, I think that’s probably why. It’s definitely a subconscious thing, but hindsight being 20/20 I’m very proud of it. Lyrically speaking, with how I write lyrics, it’s almost automatic writing. It’s a very esoteric thing that occurs, sometimes I don’t really remember [writing the lyrics]. It’s an occult science in itself.”

If someone had played The Ocean at the End to you back when The Tea Party were releasing their very first album, 1991’s self-titled record, would anything have surprised you about your future sound?

“Just the depth of it, it probably would have unnerved me and frightened me. [I would have thought] ‘I don’t see how we can get there.’ But we got there.”

So the band has made massive progression since its debut?

“Oh, absolutely. With everything that I’ve learned over the years with engineering and production, I would say that as far as my skills go in that department, this is the [album] that came after Triptych, you know what I mean? There was a lot of time between Triptych and this [record], and a lot of lessons learned and a lot of wisdom accumulated. So that’s why sonically this is such a jump.”

You played and recorded with other musicians during The Tea Party’s hiatus, like The Armada and Jeff Martin 777, but what is unique about the chemistry that you share with Jeff and Stuart? How would you define that chemistry?

“It’s the years, it’s the familiarity. Christ, I’ve known Jeff since I was five years old. I’m going to be 45 this year, so that’s a long time. And Stuart almost as long, we met in the first year of high school. We just know each other inside and out. So that’s the reason why when people come to see The Tea Party, or when other bands come to see The Tea Party, they’re shaking their heads going ‘How is this happening?'”

So things are going to change ‘dramastically’. Do you like that word? I made it up.

Does Australia remain the band’s biggest fan base outside of Canada?

For the time being, yeah. But we are going to South America so that could change quite quickly (laughs). Back in those days we tended to concentrate on Canada, Australia and Europe. But now the world is calling, like South America and Asia. So things are going to change ‘dramastically’. Do you like that word? I made it up. It’s drama and drastic.”

Is America still a mountain you want to surmount?

[huffs] “I don’t. They [the band] do. To tell you the truth, I would be happy just doing LA, New York, Detroit, Chicago, Austin… just cosmopolitan centres? Yes. But don’t even think I’m going to get on a tour bus and play Boise, Idaho and Alabama. It’s just not going to happen.”

You’ve been writing and recording with Sarah McLeod of The Superjesus. Will it be a full-length record?

“Yes it will, it will come out next year. It’s actually myself, Sarah and Mick Skelton, the drummer from The Baby Animals. I was just playing it for Jo [Corbett], my publicist and I played her three songs and after every song she just turned around and said, ‘Your fans are not going to see this coming.’ It’s a head-turner.”

Are there any other projects you’re working on?
“I did the soundtrack for the art exhibition called Windows to the Sacred, which was the works of Aleister Crowley and James Gleeson, artists of that ilk. So I did a surround-sound soundtrack [The Nightmare Paintings], so when that art exhibition tours around the world that’s playing. So that’s getting released on my label I’ve just formed called 93 Records. So that’s another avenue I’m very interested in, the avant garde art music side of things, the soundscapes. It’s a different world for me, I love it. And my business manager Robert Buratti is pretty much the leading art dealer as far as works of the esoteric go. My place in Perth is his gallery, so when I’m home I’m surrounded by priceless pieces of art. I can’t ask for more. It’s the ultimate rock star lair, it doesn’t get better.”

The Ocean at the End is out now through Sony.