I had a full three days off work and, as my luck would have it, I was struck down with a mysterious illness. My girlfriend says I may have something called “Mannflu”. So my creative writing plan went out the window as I lay confined to the sofa and caught up on some films. Here’s some quick fire reviews:

I have been told Yann Martel’s novel Life of Pi is a moving and perplexing experience, but I am yet to read it. If Ang Lee’s stunning film is anything to go by, the concept of the story is a brilliant construct in which to explore spirituality, adversity, trauma, the nature of story-telling and humanity in general. I was moved to tears. The visual effects are stunning, with frequent moments of arresting beauty. But at it’s heart is a dark and unsettling revelation that, despite Lee’s dreamscape, stays with you after the film’s finale. It’s no secret that Lee is a supreme filmmaker (I even liked his Hulk movie) and in Life of Pi he is served well by a talented principal actor in Suraj Sharma, and a timeless story. Life of Pi is highly recommended.

Despite its lazy use of numerous spooky movie conventions, Dark Skies is an effective thriller. Written and directed by Scott Stewart, the film follows a series of strange occurrences that take place in the home of the Barrett family. Something raids the fridge and makes a mess. Then utensils and food stuffs are arranged in bizarre totem poles. The Barrett family, understandably shaken, go to the police. Do the cops believe there is anything weird going on? Of course not! So who is eating food from the fridge and playing silly buggers with their mixing bowls? A poltergeist? A demon? A hobgoblin? None of the above. Mother Lacy (Keri Russell) and  father Daniel (Josh Hamilton) are told by their creepy kid that someone called “The Sandman” is responsible. But, as you can gather from the trailer, the perpetrators are of an extra terrestrial nature.

Dark Skies has no direct relation with the popular ’90s television show of the same name. It is also a change of pace from Scott Stewart’s previous films – the biblically-slanted action flicks Legion and Priest. For a director whose background is in special effects (Stewart has worked on Mars Attacks!, The Lost World: Jurassic Park and Iron Man, to name a few), Dark Skies uses its CGI sparingly. While this may have been a budget issue, it does work in the movie’s favour.

While it is by no means a masterpiece, there are a few great moments in Dark Skies. Russell has a natural and believable presence on screen and she offsets the weaker contribution of Hamilton. The always excellent J.K. Simmons has a small but important role. Next time you’re after a few cheap thrills, turn off the lights and watch Dark Skies.

HE’S BACK: Arnold Schwarzenegger returns to what he does best in The Last Stand.

Arnold Schwarzenegger’s return to cinema after his political stint is a relatively low budget affair compared to his last big screen foray. We last saw Arnie in 2003’s Terminator 3: Rise of the Machines (although a little CGI magic saw him appear in Terminator Salvation). The Last Stand was directed by South Korea’s Kim Ji-woon on a budget of $30 million and delivers everything you would hope for from an Arnie movie.

The ageing Austrian plays Sheriff Ray Owens, the man in charge of looking after the people of the tiny town of Sommerton Junction, Arizona. Meanwhile, in Las Vegas we see FBI Agent John Bannister (Forrest Whitaker) briefing a room full of colleagues on the transfer of deadly international drug lord Gabriel Cortez (Eduardo Noriega). Bannister stresses the importance of not allowing Cortez to escape. Everyone has to be on their guard. Have Cortez’s gangs plotted a daring, foolproof escape for their leader? Of course they fucking have! Cortez takes a female FBI agent hostage and gets away in a a modified Chevrolet Corvette C6 ZR1. It’s very, very fast. Cortez is going to cross the Mexican border to freedom, but first he needs to get through – you guessed it – Sommerton Junction.

Owens leads his small team of deputies in a stand to barricade Cortez’s escape. This results in a Western-style stand-off with lots of ammunition put to good use. With a supporting cast that includes Luis Guzman, Johnny Knoxville and an always villainous Peter Stormare, The Last Stand will bring a smile to the face of all old-school action movie buffs. There are a few unexpected moments of comical gore. The acting is solid for this type of cinematic outing and the script doesn’t pretend that Arnie is not well past retirement age. But the former Mr Universe still has a mischievous glimmer in his eye when he’s tearing apart bad guys with a machine gun, delivers one-liners with aplomb and has a strong physical presence on screen. It’s great to have Arnie back.

OZ THE GREAT AND POWERFUL

L. Frank Baum’s 1900 novel The Wonderful Wizard of Oz was adapted a number of times in early cinema. The story was told in films made in 1910, 1925, 1933 and 1939. The latter, released as The Wizard of Oz and starring Judy Garland, is the most famous. Sam Raimi’s Oz The Great and Powerful is set 20 years before the events of that film.

The movie opens in black and white 4:3 Academy ratio and introduces cad and carnival magician Oscar Diggs (James Franco), who is known affectionately as Oz. An ill-fated hot air balloon escape flies Oz into a tornado. He arrives in the Land of Oz, a world of colour depicted in the modern standard 2.35:1 widescreen ratio and surround sound. Oz meets Theodora (Mila Kunis), a naive Good Witch. Theodora tells Oz that a prophecy predicts the arrival of a heroic wizard in the Land of Oz who frees the land from the evil of the Wicked Witch and then claims the king’s throne in Emerald City. Embarrassed to tell them that he is only a carnival magician and not a purveyor of true magic, Oz decides to maintain his lie and figure out how to save the day with only wits and cunning.

While visually impressive, Oz The Great and Powerful lacks real wit and charm. Raimi does his best to make the action and adventure feel as though it’s on a grand scale, but the story is rambling and unfocused. Franco is an excellent actor, but he doesn’t feel right as Oz. He seems too self-conscious. The finale is exciting and works well, particularly in how it ties into The Wizard of Oz, but ultimately Oz The Great and Powerful doesn’t generate the nostalgia one might have hoped for. 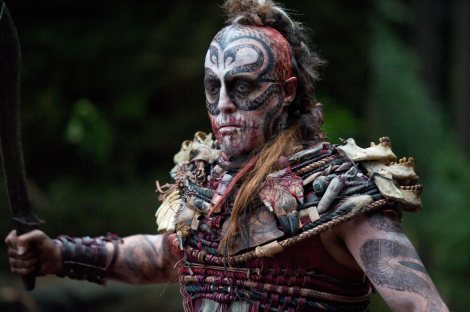 CANNIBAL ATLAS: Finally! We get to see Hugh Grant portray a cannibal tribesman.

I’d heard that this movie is quite convoluted, and in some ways it is. But a dense plot that requires concentration is not necessarily a bad thing. You can watch Cloud Atlas one of two ways – let it wash over you as a sensory experience and a rumination on how our decisions can ripple across the puddles of time. Or you can use some serious brain power to connect all the dots. My experience was somewhere in between.

I haven’t read the 2004 novel by David Mitchell, but it’s clear that The Wachowskis’ attempt to adapt it to the screen has been an ambitious one. As they demonstrated with the Matrix trilogy, they have a penchant for stunning visuals. Each of the time periods that the script bounces around between – at a rapid pace – have a dynamic synthesis of costumes and set design.

The actors deliver accomplished, nuanced performances, often under thick layers of incredible make-up. Even in the most bizarre scenarios they take their characters seriously. It pays off.

There was a lot of award-hype about Silver Linings Playbook. My favourite author, Bret Easton Ellis, said it was the best American movie of the 2012. But, while there is no doubting David O. Russell’s talent as a director – he is often brilliant – I wasn’t moved emotionally by this movie. The idiosyncrasies of every character combine to give the movie its oddball charm but, ultimately, this is a romantic comedy that abides a long list of cliches. You know how it’s gonig to end.

Much has been made of the film’s portrayal of mental illness, but the accuracy of this film’s portrayal is questionable. As strong as Bradley Cooper’s performance is, he seems to become clear of mind on the occasions when it most serves the plot. Yes, the entire cast are excellent. But this is a Hollywood romance flick that purports to push boundaries when it is, in fact, willingly constricted by them.

I’ve become a fan of this franchise and I was intrigued to see where it could be taken in a fourth installment. It’s clearly getting harder for the makers to keep the series fresh, because this contribution was the least scary so far. If you’ve been following the series, then you know how it works. The first major contrivance that each film has to overcome is making the viewer accept that the characters a) have a massive desire to film themselves and b) never run for the hills or phone authorities when disturbing things start to happen. I’ve continued to watch the series because I’m hooked on the story and fascinated by how its revealed. But Paranormal Activity 4 does not advance the story very far. The finale is similar to the end of the third movie in what it reveals, but its staging pales in comparison to the end of that prequel. There are a few interesting aspects, especially 16-year-old Kathryn Newton’s believable performance as the main protagonist, but there is now a lot of pressure on Paranormal Activity 5 to deliver something momentous in the narrative. It feels like the producers are stalling the story a) to deliberately draw this out to a ten-film franchise or b) because they don’t know where it’s going either.