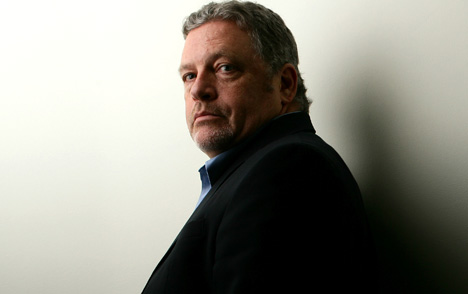 In 2010 I interviewed Dexter creator Jeff Lindsay about his book Dexter Is Delicious. There’s a few nice insights into writing that fellow authors might enjoy. So, from the vault, here’s my chat with Mr Lindsay.

Lindsay has explored the complex Dexter Morgan in five novels.

The first was Darkly Dreaming Dexter in 2004 and the most recent was 2010’s Dexter Is Delicious.

The books have inspired the hugely popular television series, which just aired its fifth season, but the program has had original storylines since the second series.

Lindsay admits it was a little nerve-wracking to put his character in the hands of a faceless team of writers.

“I was even nervous turning it over to Michael Hall at first, because I didn’t think he could do it – and I was really wrong about that,” Lindsay says.

“Now I’m happy having it in his hands.

“But every season there are new writers and I don’t know what they’re going to do.

“I just know at some point in every season I’m going to go, ‘Oh no!’ I love the show, don’t get me wrong. But there’s things you have to do because it’s TV that I would never in a million years do in the book.”

Indeed, major characters who have been killed in the show are still alive in the books.

But Lindsay has accepted that the Dexter Morgan on television is on a different path to the Dexter of his wry, twisted novels.

“I’m pretty much detached [from the show], especially this season because the head writer left the show,” Lindsay explains.

“So I don’t even know who [the head writer] is anymore.

“I speak occasionally to one of the executive producers and I usually visit the set at least once every season, but I didn’t do that this year either. Maybe it’s becoming normal.”

In last year’s Dexter Is Delicious, the title character finds himself in the visceral, confronting world of cannibalism.

Some grim research was required.

“You know, it will turn your stomach, but it’s really easy,” Lindsay says.

“Everything you want. It’s way too easy to find. “

So cannibalism is going on out there?

“Oh yeah, there’s no question about it. Absolutely,” confirms the author.

Dexter Morgan, as always, adheres to the law during his day job with the Miami police, but at night time kills other serial killers with deadly and cold precision.

“I don’t really go into [forensics] too much,” Lindsay admits.

“I know enough of it to keep it real and honest and I have a lot of friends who do it for a living, so I if I’m stuck I can call them.

“To be honest with you, it’s not what I’m interested in writing about. There are people who can do that much better than I ever could.

“There’s a friend of mine, Lisa Black – she’s a wonderful writer, but her day job is forensics. She could write about mass spectrometers all day long. I go into it and after 10 minutes my jaw starts to ache.”

Lindsay is contracted to write one new Dexter book each year and Dexter Is Delicious only took the author three months.

His process has a simple starting point.

“I really need to have a beginning, a middle and an end,” Lindsay says.

“I need to know what that last scene is going to be like and what the book is about.

“I work my butt off to do a really solid, long outline before I start writing. I always mean to. But at a certain point I get impatient.

“Because of that, there’s a point in every single book where I’ve painted myself into a corner.”

It’s at this point where Lindsay might ask for some help from his wife, whose DNA makes her qualified to assist.

Lindsay is married to Hilary Hemingway, an author and niece of Ernest.

“I go back and say those magic words, ‘Help me, Hilary’. My wife is extremely good with structure.”

The Dexter books continue to take place in the humid climate of Miami.

Lindsay no longer lives there, but he did grow up in the Floridian city.

“Nothing else ever occurred to me,” says Lindsay of choosing Miami.

“I just started writing: In Miami one day …

“It’s where I’m from. I have a special relationship with the place. Sometimes it’s a love-hate relationship. But I don’t know where else I could put the story.”

Setting the Dexter series in Miami is also inspired by fiction that Lindsay read when he was young.

“My mother loved to read mysteries and because I grew up in Miami, there’s a writer called John D. MacDonald, who is kind of the father of all Florida crime writing,” Lindsay explains.

“In fact, I think his son is a Kiwi. I read a lot of those [books] when I was a kid and what I really wanted to do was to write that kind of series: a reluctant hero who solves crimes because he has to.

“My first book, Tropical Depression [in 1994], was like that. I’ve continued on with Dexter.”

It’s one thing to love reading, but why the career choice?

“It’s storytelling. I found out early on that it impresses girls, so I stuck with it.”

* Dexter Is Delicious is out now through Hachette.