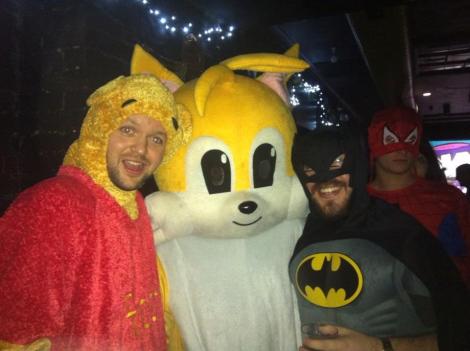 COMICAL BEHAVIOUR: Naggy as Pooh Bear, Oscar as Tails and yours truly as The Caped Crusader. Spiderman, aka Oliver, on photobomb duty. I’m so badass that I actually wear my mask over my glasses.

I haven’t been blogging very much in the past fortnight – I’ve been busy. Which, as far as sound excuses go, is somewhere between “I’ve been lazy” and “I’ve been in prison”. Now that I have this blog there is a clear obligation to continue to post things. Whenever I discover a blog and the last post was from say, 2009, the first scenario that occurs to me is: “Oh no, this person died.” So here’s a blog to let you know I’m alive and well. I don’t want this website to be left in suspended animation.

Recent occurrence: I attended a dress-up party in a Batman outfit (see above).

Here’s an update from NM HQ.

The past two weeks has yielded many fascinating conversations with musicians and one very famous comedian/actor. I’ll quickly bring you up to speed on who I’ve been interviewing. The subsequent feature articles will be up on the Maitland Mercury‘s website soon, and a few bits and pieces might make it on to the new Reverb website (www.reverbstreetpress.com).

This week I spoke with Sara Quin, of Canadian pop sisters Tegan and Sara, ahead of their return to Groovin The Moo. She was very sweet and chatty. I may have interviewed her before (I can’t remember which sister it was). Their new record Heartthrobs is a lolly bag of instantly likeable synth-pop songs. Undeniable energy and their trademark infectious harmonies. I’m looking forward to catching them live again.

This was a real treat. Flansburgh, along with John Linnell, is one of the two founding members of New York indie legends They Might Be Giants. I discovered these guys back in 1998 when their song ‘Dr Worm’ came in at number 13 on Triple J’s Hottest 100. Interestingly, ‘Dr Worm’ was only a hit in Australia. Their hardcore fans love it, but it didn’t gain a national following in any other country. It’s an example of their genius. “I’m not a real doctor, but I am a real worm,” is still one of the most clever lyrics I’ve ever heard. In researching for the interview, I listened to their children’s music for the first time – I highly recommend checking out songs like ‘Meet The Elements’. I was spoiled to have Peter Combe writing kids’ music when I was young, but I feel deeply sorry for the generation that had a mind-numbing choice between The Wiggles and Hi-5. Attention parents: buy  the children’s music written by They Might Be Giants for your offspring.

One of the The First Family of Comedy, Marlon Wayans and his brother are heading to Newcastle’s Civic Theatre for a night of stand-up. They’re the co-creators of Scary Movie and Don’t Be A Menace to South Central While Drinking Your Juice in the Hood. Marlon also had a dramatic turn in Requiem for a Dream. He was driving through a canyon in Los Angeles at the time of our interview. He was very humble and friendly.

Dizzy is the second longest-standing member of Guns N’ Roses and he was a very nice guy to chat to. I was interested to know about his creative contributions to the group’s music and also to gain more of an insight into the enigma of Gunners singer Axl Rose. Although he was very friendly, I did find Dizzy’s responses to any question regarding Axl as being very carefully worded and a little guarded. I am by no means pointing this out to try to add any weight to the negativity that surrounds Rose. It could simply be that Dizzy has learned not to trust journalists with any quote about his lead singer. But while the keyboardist stressed that he felt there were misconceptions in the public sphere about Rose, I ran out of time before I could properly gain an insight the specific positive aspects of Rose’s personality. Their Newcastle show, with ZZ Top and Rose Tattoo, is going to be a cracker.

I’m glad I finally got to chat to Scott, vocalist and poetic lyricist of Frightened Rabbit. This guy is a truly exceptional wordsmith and songwriter. I saw them live a few years back when they supported Echo & The Bunnymen (a good pairing only on paper). He was very friendly and gave the candid, insightful answers that I was expecting he would. Definitely check out their latest record Pedestrian Verse. 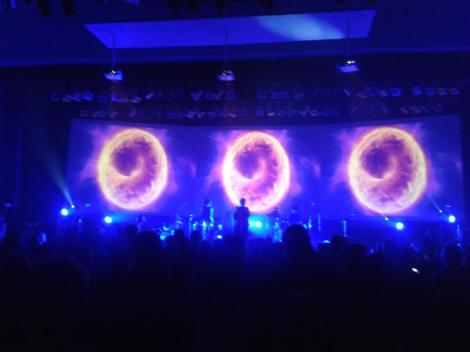 I saw Cat Power live, for the second time, last night. I enjoyed the show so much more this time. Chan Marshall seemed in a good mood and made a few attempts at the Australian accent. In fact, her opening greeting was “G’day motherfuckas.” When I saw her last time the show was slow-burning and meandering, and while it was mesmeric, it also required deeper concentration. I recall it being a mentally draining experience, despite having enjoyed its artistic merit. I think it’s fair to say that the show was an honest reflection of her headspace at that time. In noticeable contrast, Friday night featured a more uplifting and upbeat set list. There were also some beautiful visuals. A great show.

VALENTINE’S DAY: My Bloody Valentine return to Sydney after an extremely long absence.

Depending on the sonic thresholds of the listener, it’s either a very good or a very bad sign when you are handed a pair of foam earplugs on the way into a show. Such was the case for Irish shoe-gaze noise-rockers My Bloody Valentine. Kevin Shields gave a polite hello at the show’s commencement and then he allowed his wall-of-drenched-guitar-reverb do the talking. It wasn’t as deafening as the free earplugs had you believe, but the sound had all the depth and hypnotic hocus pocus that fans could have hoped for. The plug were called upon, however, when at the show’s finale Shields and his co-conspirators launched into an oppressive 15-minute sustained blitzkrieg of white noise. Now, 15-minutes is noticeably long for a melodic or chaotic progressive rock song. It feels very fucking long when it’s just a band blasting a single, unwavering assault. It was overwhelming. After, say, 12-minutes it was bordering on torture. But then, suddenly, after it seemed Shields and My Bloody Valentine might continue the sound until everyone has suffered complete sensory overload and had been reformatted to forget their lives before this MBV concert, the noise cleared like a storm and a soft, ray of a quiet ballad emerged. It was certainly cathartic – and a musical experience unlike what anyone in the room would have ever experienced.

Here’s my review of Glenn Frey at Newcastle Civic Theatre that I penned for the Maitland Mercury (please acknowledge the ridiculous/genius-like nature of the final par):

The Eagles have more than one capable vocalist.
Don Henley commands the Californian group’s rockier material – Life In The Fast Lane, Hotel California and One of These Nights.
But Glenn Frey has the sweetest set of pipes and his voice is synonomous with the ballads that soundtracked the youth of the Baby Boomers.
On Thursday night, the Civic Theatre was packed full of memory-lane walkers to see Frey sing a selection of Eagles classics.
But the rock legend was in the country to promote his After Hours record, a selection of standards from the “Great American Songbook” – tunes that Frey’s parents listened to.
So the onus was on Frey to find a balance between the old and new material, and he did so with aplomb.
He softened the blow by opening with some big Eagles numbers – Peaceful Easy Feeling, Tequila Sunrise and Lyin’ Eyes.
His nine-piece band were a slick unit, delivering classy renditions of those easy-listening scriptures.
Then Frey eased into his After Hours material and the attentive crowd allowed him this indulgence.
The singer and his band gave The Beach Boys’ Carolina, No a shimmering elegance and imbued a deft smoothness into Dusty Springfield’s The Look of Love.
Frey also covered Nat King Cole’s take on Route 66.
To maintain a consistently debonair aura, Frey re-worked his ’80s classic The Heat Is On into a slinking, jazz number.
Smuggler’s Blues was given a similar treatment.
Then, to reward the Eagles faithful, Frey slipped in The Girl From Yesterday and finished the main set with Take It Easy.
His encore was a double punch of two big classics – Take it To the Limit and Desperado.
If the prompt standing ovation was any indication, Frey had ticked enough boxes to make both himself and the Eagles fans happy.
The crowd had received the best of his love and, in the long run, that’s all that matters.

I had a ball at Sydney’s Soundwave this year. Sadly, there were some terrible clashes and I missed a lot of the bands I wanted to see. Through the magic of the internet I was able to compile information on acts I might have missed. Here is my more “comprehensive” review: Metallica return to roots at biggest Soundwave ever.

It was awesome to finally see Metallica – they’re a consummate, tight unit. I was a bit annoyed that they came on stage half an hour late, as it meant having to miss the very end to catch my train. But I still saw nearly two hours worth.